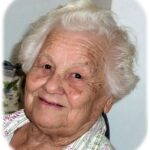 Odelia “Babe” Arellano, 98 of Superior, AZ, decided long ago to surpass the age of 97.  On April 8, 2022, one week after her 98th birthday, she left us to go with her heavenly Father. Her family and her Catholic faith were the two most important things in her life.

Odelia, or Babe to most, was born March 31, 1924, to the late Candido and Ramona Arellano. She was one of nine children; her siblings who preceded her in death are Julio, Lamberto, Elmo, Henry, Jesus Gallego, Elisa Freeze, Hortensia Varela and Lillie Martinez. She leaves behind many nieces, nephews, grand-nieces and grand-nephews who will miss her dearly.  She was like our second “mom” very caring and loving to each of us.

Aunt Babe owned a snow cone “raspada” store in Superior for many years! She had her signature flavors which were favorites to many! The greatest gift she provided to generations of Superior residents are memories of going out for a snow cone and having a kind word with her. She had the ability to know who everyone was and their favorite flavor!

Funeral Services will be held on Thursday, April 21, 2022, at St. Francis Catholic Church in Superior, Az. Rosary is at 9:30 a.m., and Mass at 10 a.m. Interment will immediately follow at Fairview Cemetery.  A luncheon at Los Hermanos will follow.