OCTOBER 5 IS DEADLINE FOR ARIZONA TEACHERS TO APPLY FOR STEM MINI-GRANTS FROM APS, PHOENIX SUNS 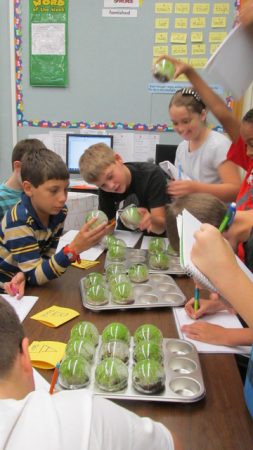 PHOENIX – Time is running out for Arizona K-12 teachers in public and charter schools within APS’s service territory to apply for STEM mini-grants for the 2016-17 school year. This year’s deadline to apply for the grants is Wednesday, October 5.

For more than a decade, APS and the Phoenix Suns have partnered to promote STEM education (science, technology, engineering and math) in Arizona schools by offering $50,000 in mini-grants for teachers to implement innovative and hands-on projects that help bring STEM subjects to life. Grants of up to $2,500 each may be awarded, with a total of $50,000 available for the 2016-2017 school year.

Teachers are invited to visit aps.com/corporategiving for program procedures, criteria and STEM mini-grants applications. At that link, they also will find a list of project summaries from the 2015-16 school year. Applications will be accepted online until October 5, and recipients will be notified of the status of their application by November 8. For more information, teachers may contact Laura McBride, APS senior corporate giving specialist, at 602-250-2702 or by email at Laura.McBride@aps.com.

About APS
APS serves about 2.7 million people in 11 of Arizona’s 15 counties, and is the Southwest’s foremost producer of clean, safe and reliable electricity. Using a balanced energy mix that is nearly 50 percent carbon-free, APS has one of the country’s most substantial renewable energy portfolios, and owns and operates the Palo Verde Nuclear Generating Station, the country’s top power producer and largest producer of carbon-free energy.  The company is also a proven leader in introducing technology and services that offer customers choice and control over their energy consumption.  With headquarters in Phoenix, APS is the principal subsidiary of Pinnacle West Capital Corp. (NYSE: PNW).

About Phoenix Suns
The Phoenix Suns, Arizona’s original professional sports team, enters its 49th season in the NBA with this year’s 2016-17 campaign. The fourth-winningest team in NBA history, the Suns’ success is highlighted by two MVP’s, 23 All-Stars and 29 Playoff appearances during its time in the Association. The club has left an indelible mark off the court as well, donating more than $17 million to Arizona non-profits since the inception of Phoenix Suns Charities in 1988, and positively impacting thousands of young lives each year.