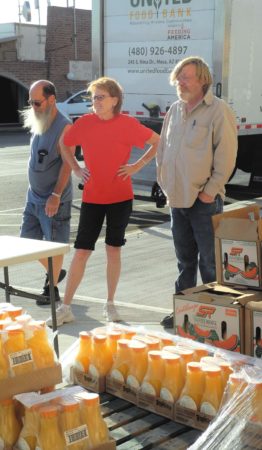 According to a recent study from Feeding America, United Food Bank has made a striking impact in helping Arizonans out of poverty throughout our service area covering more than 19,000 square miles. The overall food insecurity in United Food Bank’s five counties ranges from a low of 13.9% of the population in Pinal County to 25.5% in Apache County.

The study reports a nearly 1% reduction in the food insecurity rate from 2015 to 2016 in the counties United Food Bank serves:

“I am proud of the positive impact we are making in fighting hunger in Arizona,” states Dave Richins, United Food Bank CEO. “One percent may not seem like a lot, but in reality, it is a dramatic improvement. Our donors, volunteers, agencies and staff should take a lot of pride in knowing we made a dent in Arizona’s food insecurity rate.”

There is still a great need for support from the community to help eliminate hunger. In fact, Arizona ranks 12th in the nation for food insecurity and 6th in the country for child food insecurity. Just in United Food Bank’s service area, nearly 225,000 people are food insecure with more than 84,000 of them children.

United Food Bank is one of 200 food banks in the Feeding America network that collectively provide food assistance to 41 million Americans struggling with hunger.

Map the Meal Gap 2018 uses data from the U.S. Department of Agriculture, U.S. Census Bureau, U.S. Bureau of Labor Statistics and food price data and analysis provided by Nielsen, a global provider of information and insights. The study is supported by The Howard G. Buffett Foundation, Conagra Brands Foundation and Nielsen.

More specific data is available from United Food Bank, as well as a summary of the findings, an interactive map of the United States, and the full report available at map.feedingamerica.org.

Feeding America is a nationwide network of 200 food banks that leads the fight against hunger in the United States. Together, we provide food to more than 46 million people through food pantries and meal programs in communities throughout America. Feeding America also supports programs that improve food security among the people we serve; educates the public about the problem of hunger; and advocates for legislation that protects people from going hungry. Individuals, charities, businesses and government all have a role in ending hunger. Donate. Volunteer. Advocate. Educate. Together we can solve hunger. Visit www.feedingamerica.org.