Municipal Elections for 2022 across the Copper Corridor: Pinal County made errors on Superior, Mammoth ballots 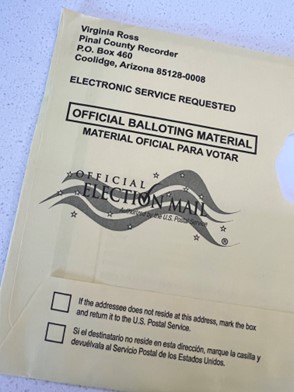 Arizona voters, televisions, radios, and mailboxes are all starting to be consumed by information from candidates in the upcoming primary elections for Governor, Secretary of State, State School Superintendent, State Legislature and federal seats for Congress and a Senate seat.  What many may not realize is that our local elections for Mayor and Town Council seats are also on the ballot at the Aug. 2 election.

Copper Area News is providing an update on which seats are up for re-election, who is seeking re-election and which races have opposition.  Registered Independent voters may need to reach out to the Pinal County Elections office to request a ballot.  With the 2020 Census complete, voters also should be aware that legislative and congressional districts have changed.  The majority of the Copper Corridor is now in Congressional District Two and Arizona State Legislative District 7.

Pinal County residents are urged to check their mail in ballots to ensure that local municipal elections are on the ballot.  It was determined this week that many Cities and Towns had their elections left off ballots to almost 70 precincts.  At press time it is determined that it has affected voters in Superior, Apache Junction, Casa Grande, Eloy, Maricopa, Mammoth and Queen Creek.  (Copper Area will provide information for voters in Superior and Mammoth on how the county is rectifying the situation, information we did not have at press time.)

Kearny:  Voters in Kearny Town limits will need to vote for a new mayor and three council seats.  Current Mayor Jamie Ramsey did not seek re-election due to policies at her place of employment that restrict employees from seeking elected office.  Councilmember Thomas O’Conner and recently appointed Councilmember Curtis Stacy are both running for the Mayor’s seat.  Councilmember Rudy Flores and Daniel Radcliff will not be seeking re-election leaving three council seats up for election.  Jackie Jackles and Aleynia Boatman will both be on the ballot.  The Council will need to appoint someone to the third vacant council seat in January.  Kearny voters were not affected by the Pinal County municipal election errors.

Mammoth: The Town of Mammoth has three Councilmembers up for re-election plus a vacant council seat that voter will be able to vote for the candidate.  There are six candidates running for the four seats.  Incumbent candidates Annie Martinez and Ernie Bustamante will be seeking re-election and the following residents are also running against the incumbents for the four seats: Irene Germain, Tracy Haun, Joe Dietz, Don Jones and Alvaro Barcelo.  Recently former mayor Joe Dietz was appointed to fill a vacancy on the council due to the resignation of Juan Ponce.  All voters in Mammoth Town boundaries will be receiving a mail in ballot with the municipal elections on it.  Voters will need to mail those ballots back, if you are a voter who votes day of elections, you will still need to go to the local polling place to vote on your State, County and Federal elections.

Superior: Residents of Superior will be voting for Mayor and three council seats.  Current Mayor Mila Besich is seeking re-election and is running un-opposed.  Her name will be on the ballot.  Incumbent candidates Vice Mayor Michael Alonzo and Councilmember Aguilar will be seeking re-election for two of the three open seats, their names will be on the ballot.  Amy Byrd and Elizabeth Magallanez are also candidates for the open seats, their names will not be on the ballot as they returned paperwork for candidacy after the ballot deadline.  Voters can choose to write in their names on the ballot; both met the official qualifications for write-in candidates.  The third seat will be vacated by retiring Councilmember Stephen Estatico.  Councilmember Estatico served on the Superior Town Council will complete nine years of service to the Town of Superior in November 2022.  Superior was also affected by the Pinal County ballot printing errors. Pinal County will be mailing all voters in the Superior Municipal Town limits a supplemental ballot with the Mayor and Council elections to be mailed back.  Voters who are day of voters will need to return the supplemental ballot via mail or drop off at one of the County Recorders offices.

Winkelman: The Town Winkelman has three council member seats for voters to fill.  Incumbent candidates seeking re-election for these seats are: Emilia Rutledge and Angela Skillings.  The third seat was filled by Joe Martin; Martin recently resigned from the Winkelman Town Council due to health issues.  A local resident has submitted an application to be appointed by the Council.  The Winkelman Town Council will consider the appointment at their July 25 meeting.  Winkelman is a five-member town council and the Mayor is appointed from within the Council.