Anyone who has lived in or visited Superior, Arizona, will likely know or remember Mike McKee.  He was a friend to everyone and was instrumental in keeping momentum going across the community his entire life.  Well known for his efforts to raise money for cancer research via the Superior Has Heart events, and a long standing volunteer on Thursdays at the Superior Chamber of Commerce, Mike McKee was the unofficial Mayor of Superior and one of the town’s most influential cheerleaders.

Mike McKee left this physical place in March of 2019, very unexpectedly – a great loss to his his friends, family and the entire community.  His friends and family came together to sponsor a scholarship in his memory as a way to pay tribute to him.  To continue to the scholarship, his  friends and family, worked together to host the first ever Mike McKee Motor Madness Classic Car and Hot-Rod show to raise money for the memorial scholarship fund.

After several postponements due to COVID protocols, the first Mike McKee Motor Madness car show was hosted this Saturday, with more than 100 cars from across the state entering.  Without a doubt Mike must have been smiling down on the gathering of family and friends honoring him through one of his passions, cars and racing and, of course, happy that downtown Superior was full of people enjoying his hometown! What a better tribute to a person who meant so much to so many people.

During the car show there was entertainment, raffles, a 50/50 raffle and the Superior Red Bear hosted a beer garden to raise funds.

The scholarship committee intends to focus their awards of scholarships to go to students pursuing an education in the skilled trades. 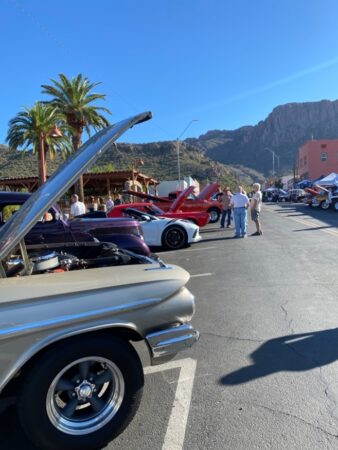