Mic Johnson: In the Prison Camps 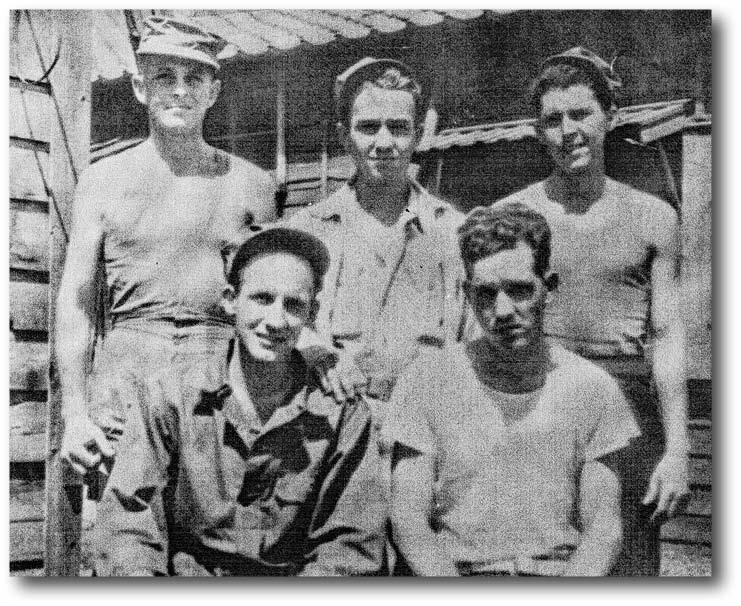 Mic Johnson is pictured with fellow POWs after their release.

The Kiang Wang camp was located on the outskirts of Shangai. The treatment of the prisoners was as bad as Woosung. Food was scarce, medical treatment was poor, brutality by the guards continued and the prisoners were forced to work 12 hour days. Mic was lucky; during his first two years of captivity he was placed on light duty due to his battle wounds.

By the summer of 1943 because of the starvation diet and increase in work hours, many of the men were living skeletons. A number were sick and the makeshift hospital manned by American doctors that had been taken prisoner was low on medicine and medical supplies. The doctors were doing surgery with razor blades and sewing up wounds with thread or fishing line.

Thanks to the International Red Cross many prisoners were able to survive. The Red Cross was able to deliver food, medicine, medical supplies and warm clothing to the prisoners. The Japanese looted the supplies, although enough got through to make a difference. A Swiss representative of the International Red Cross, Edouard Egle, saw to it that the prisoners received some wooden stoves, books and vegetable seeds for the gardens prisoners had started. In early 1944, Egle personally delivered food packets, coveralls and boots to each prisoner. For many of the men the clothing he brought was their first change of clothes in two years.

Kiang Wang prison was located near two airfields. American planes had begun bombing Shanghai and the airfields. Some of the guards took out their anger over the bombings in Shanghai and Japan on the prisoners. One incident involved some prisoners cheering after watching an American fighter plane shoot down a Japanese plane. Some angry guards then bayoneted three prisoners. As bombings became more frequent and the news of American bombing raids on Tokyo reached the prison camp, morale grew for the Americans while the Japanese began to realize that the war may be lost.

In May 1945 the prisoners were loaded on train box cars and transported to Fengtai a prison near Peking in China. The trip took five days. During the train ride some American prisoners successfully escaped by jumping off the train. In June, they were loaded on another train to Pusan, Korea. They would be transported by ship to a prison camp in Japan. As the war neared its end, the guards began treating the prisoners better.

Mic Johnson and the Wake Island prisoners had survived 44 months of brutal captivity, starvation and disease.

“We were threatened with death every day,” said Mic.

The war would be over soon but what about the fate of the prisoners? Next week, coming home.

If you missed the first parts of this story, go online to read them.

Mic Johnson and the Voyage of the Nitta Maru http://bit.ly/1R9abLa