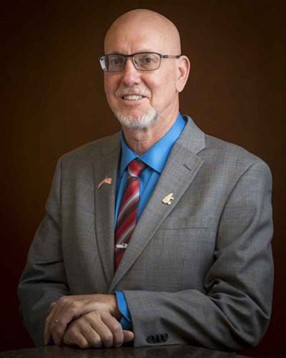 Every 10 years after the official US Census is complete, Federal  State and Local governments must complete a re-districting process.  On July 1, 2022, the Pinal County re-districting took affect and the communities of Superior, Kearny and Winkelman join Gold Canyon, Apache Junction, Queen Valley and parts of Florence in District 5.

Jeff Serdy is the County Supervisor for District 5. He ran for County Supervisor after serving on the Apache Junction City Council and as Mayor.  He decided to get involved in local politics at the municipal level when the City of Apache Junction was considering new laws on firearm dispositions.  He quickly realized he enjoyed serving and solving problems and ran for Mayor.  During his term as Mayor, he focussed on marketing and promotions of the city’s natural beauty and attractions.

Serdy grew up in rural community in Ohio.  He has worked in a variety of professional fields including oil and gas, wildlife management, and also worked for Shamrock foods.  He had the opportunity to open his own firearms store in Apache Junction and he has been focussed on his business since then.

Serving as County Supervisor since 2021, he is learning how Pinal County is quickly becoming a more urban county in many of the areas, but he sees great potential for District 5 to continue to be the part of the county where people come to recreate.

He is a champion for the Resolution Copper project and mining in general.  Serdy has been working since he was Mayor of Apache Junction and now as Pinal County Supervisor to have the Apache Trail repaired and re-opened.

“I think we can have it re-opened in two to five years” he explained.

He is an active proponent for the expansion of the Arizona freeway expansion 24, which will help to alleviate the traffic through Gold Canyon on the 60.  He would also like to see Pinal County focus on bringing more jobs to the County and then the housing will come; where in the past the focus has been on building homes and then jobs would come.  With new manufacturing coming to Coolidge and Casa Grande housing will be needed throughout the county.

Maintaining an open line of communication is important to him, he encourages constituents to contact his office in Apache Junction via phone or email.  He and his staff are ready to serve.  They can be contacted at jeff.Serdy@pinal.gov or via phone at 520-866-6106.  Additional contact information can be found online: https://bit.ly/3zy37WW

He enjoys serving in an elected capacity.

“It is not always fun, and it is very challenging, but it is rewarding to serve,” he said.  He is married; he and his wife Svitlana and almost ever-present Australian Cattle Dog, Mishka live in the foothills of the Superstition Mountains. He has three grown children and one high-school-age grandchild.