The remote and rugged country surrounding present day Superior up to Globe-Miami, and the Hayden-Winkelman area was land occupied by the Apaches. It would take the arrival of the United States Army to make the area relatively safe for prospectors and settlers. 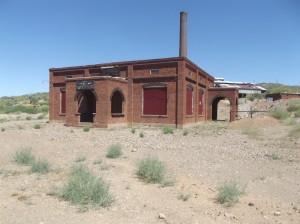 General George Stoneman and his troops established Pinal Camp in 1870. One year later, Stoneman moved the camp to the foot of Picket Post Mountain and named it Camp Picket Post. The troops then began building a road through the Pinal Mountains toward Globe. The road known as Stoneman’s Grade was never completed but played a part in the discovery of the Silver King mine.

While working on the road, a soldier named Sullivan discovered a piece of native silver. After leaving the army, Sullivan searched for the area where he found the silver but never discovered it. Before he died he told a rancher named Mason about his discovery.

In 1873 silver was discovered at Globe which led to a surge of prospectors in the surrounding areas which included present day Superior. That same year, the rancher Mason and four other partners found Sullivan’s silver lode three miles north of present day Superior and at the foot of Stoneman’s Grade. The Silver King mine was a rich strike and the town of Silver King rapidly grew around the mine. The town of Pinal also boomed during this time as it was the site of the mill. Workers and prospectors flocked to the area from all over the country even though travel in the area was dangerous due to Apache marauders. The Silver King mine operated from 1875 to 1889 and reopened again from 1918 to 1928. During that time the mine produced 6.2 million troy ounces of silver. The towns of Silver King and Pinal died out in 1888.

With the success of the Silver King, more prospecting was being done in the area. In 1875, Irene Vail located the Irene Claim and William Tuttle discovered the Hub Claim. Both of these claims would later compose the Silver Queen mine and eventually become the nucleus of the Magma Mine in Superior. A group of old mining claims known as the Gem and Hastings group were discovered shortly thereafter. Mills were constructed and were worked from 1876 to 1882. The gold mining claims also played a significant role in the establishment of the town of Superior. The town that sprung up around the mines was first called Queen then Hastings. After 1889 there was little mining activity in the area. In 1897 an Englishman named George Lobb who had worked as a level boss in the Silver King mine, relocated the Gem & Hastings claims and renamed them the Golden Eagle Group.

In 1902, Lobb sold the Golden Eagle Group to a Michigan company, the Lake Superior and Arizona Mining Company (L.S. & A).Lobb had built a general store with living quarters which was located on Main Street at the site of the parking lot of Superior’s present day post office. Lobb laid out the plans for a town and on December 29, 1902 the Superior Post Office was established in Lobb’s general store. Lobb was the town’s first postmaster.

The L.S. & A. had been interested in the copper in the area and not the gold holdings. By October of 1902 the mine started operations. The mine continued to prosper bringing more people to Superior until 1909 when the company considered closing its operations.

In 1910 William Boyce Thompson, a man from Montana who was known to take mining properties that were failing or considered worthless and turn them into moneymakers, was in Arizona looking for such properties. He had recently acquired the Inspiration mine in the Globe area and was already sure that it would be prosperous. Thompson bought the Silver Queen mining properties for $130,000. He and his partner George Gunn then organized the Magma Copper Company. The L.S.A. mine shut down in 1912 and was purchased by the Magma Copper Company shortly after.

Magma contracted with John Hendricks to haul the high grade ore from the concentrator and mine to Florence. The hauling was done by wagons. Each load consisted of a lead wagon with two trailer wagons powered by 32 horses or mules. The loads were 30 tons each. Hendricks was paid $10 per ton or $7.50 a ton each way if the return trip included supplies for Magma. It was then loaded on the Phoenix and Eastern Railroad cars and transported to the American Smelting & Refining Company (ASARCO) at Hayden. The trip would take over a day weather permitting. Management at Magma realized that this was an expensive way to have their ore processed and looked for other methods to save money. An aerial tramway from Superior to Miami was considered as well as building a truck road Ray but construction costs would be high. They finally settled on a railroad from Superior to Webster (now Magma Junction) on the Phoenix & Eastern Railroad line. The Magma Arizona Railroad was then organized.

By 1920 the mine had increased in size and value and management made a business decision to build their own smelter.The town of Superior had undergone many changes during these years. Magma built a frame hospital and provided a clubhouse for employees that contained a gymnasium, swimming pool, and tennis court. Hotels were constructed and streets laid out and named for early day residents such as Lobb Avenue.

The town grew into two communities one called “American Town” and the other “Mexican Town”.

On November 24, 1927 one of the worst mining disasters in Arizona history took place at the Magma mine in Superior. During the “graveyard shift”, a fire swept down the number 2 shaft. This shaft was an intake shaft. There were 49 men working underground when the fire was discovered at 3:30 a.m. A shift boss was investigating the constant ringing of electric bells in the two hoisting compartments of the shaft. While descending down the shaft he found smoke at the 1200 foot level and signaled for the cage to be raised. He had the cage stopped at the 500 foot level and helped the cage tender through the ventilation doors and reported the fire. The cage tender had been overcome by smoke. One man was then lowered in a cage. He was killed presumably from burns and smoke inhalation as the hoisting cable from the cage was burned off. Men in the mine smelled smoke and proceeded to the number 3 shaft where they were quickly hoisted out of the mine. Another group of miners made it to the 2200 station and saw the flames roaring up the shaft but no smoke came into the station. They eventually made it out safely. Fire fighting crews from the mines in Globe and Miami assisted in fighting the fire but could not get it under control. Crews were sent underground to search for people that had not returned to the surface. Finally Magma officials ordered the shaft flooded. Seven men lost their lives that morning. Hundreds of townspeople had hurried to the mine after hearing the disaster signal that early morning. They waited anxiously hoping their fathers, brothers, husbands, sons and friends would be brought safely to the surface.

The Winslow Daily Mail newspaper reported that “Zeno Daly, the Indian listed as missing, was the hero of the disaster. According to reports after safely reaching the surface, he joined one of the rescue crews which were working in relays and returned to the fire area. He is reported to have become lost shortly after.”

After the disaster, Magma mine continued to be successful. Even during the Depression, they continued operations although cutting back on labor and production. World War II would bring more Mexican Americans into the workforce at Magma. One of the greatest improvements at the mine was the installation of underground air conditioning units. Magma mine was considered a “hot” mine due to its high rock temperatures. At the 4,000 foot level temperatures of the rock were recorded at 140 degrees. Magma consulted with the inventor of air conditioning Dr. Willis H. Carrier, who invented air-conditioning in 1902 and pioneered underground air conditioning. Dr. Carrier had installed a system in the Robinson Deep Mine in Johannesburg, South Africa. Carrier designed the system for Magma. Magma was the first mine to have an underground air-conditioning system in the Southwest.

In 1956, the San Manuel division came into operation. In 1969, Magma came under control of Newmont Mining Corporation but became independent when Newmont spun it off. Magma was operating sporadically in its later years and ceased production in 1995. In 1996 it became part of BHP. Now the mine is owned by the Resolution Copper Mining which is owned 55 per cent by Resolution Copper Company, a subsidiary of Rio Tinto PLC, and 45% by BHP Copper, Inc., a subsidiary of BHP-Billiton.

William Boyce Thompson and George Gunn, the founders of the Magma Copper Company, are gone now but their company played an extremely important part in the development of Arizona’s great copper industry. With Resolution Copper poised to re-open the Superior operations, maybe there is a new chapter left to write about the mines that were Magma and the town of Superior.