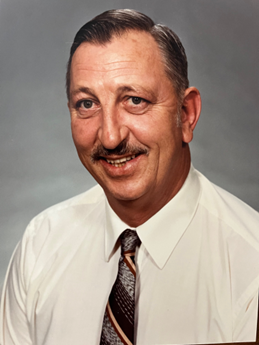 Bugs graduated high school in Kemmerer in 1954 with a basketball scholarship to Casper Junior College and played for two years at Casper.  He then transferred to University of Wyoming, playing basketball on a scholarship.  Bugs graduated from the University of Wyoming with a Bachelor of Science degree, majoring in physical education and minoring in social studies. After moving to Arizona, he attended Northern Arizona University, obtaining his master’s in physical education.

Bugs married the love of his life, Loretta Dibler, July 15, 1959. Bugs and Loretta were to celebrate their 63rd anniversary in July. They were blessed with two children, Lana and Larry, both of whom graduated from Ray High School.

Bugs began his teaching career teaching at the junior high level, transitioning to teaching high school.  After teaching in Big Piney, Wyoming, for 8 years, in 1967 Bugs and his family moved to Kearny where he taught History, Social Studies and Physical Education.  He eventually became the Dean of Students at Ray High School.  Mr. Lewis coached football, basketball and track.  He was one of the founders of the girls’ Meet of Champions track meet. He taught driver’s ed in the summers.  He retired from Ray High School in 1997 after 30 years of mentoring and teaching the students at Ray High School.

While in Wyoming, Bugs was an avid hunter and loved everything the Wyoming mountains had to offer.  He loved camping and fishing with his family and friends.

Bugs was a loyal member of the Elks.  He joined the Elks in 1967 in Rock Springs, Wyoming.  After moving to Kearny, along with a group of other members, he helped establish the Kearny Lodge No. 2478 in 1972.  He went through the ranks as an officer in the Kearny Lodge, eventually becoming the President of the Arizona Elks Association.  He then became Elks National Youth Activities Chairman and in 2011 became the Elks Grand Lodge Esquire.  He was always involved in the Arizona Hoop Shoot and was known to all as the Junk Food King.

In addition to his parents, he was preceded in death by a sister, Carol Jean Larson.  Surviving in addition to his wife, Loretta (Dibler) Lewis, are daughter, Lana Fonts; son, Larry Lewis and his wife Nancy of Camano Island, WA.; grandchildren, Tiffany Noble and Ted Besch; four great-grandchildren, Michael, Matthew, Gabriella and Ted; one brother, Frank Lewis of Dickenson, ND; two sisters, Sidney Edlund Allen and her husband Cory of Hyrum, UT, and Betty Kay Moseka of LaBarge, WY.

A celebration of life will be scheduled later this fall.  Those who wish to remember Bugs in a special way may make gifts in his name to the Elks National Foundation by sending checks to: Elks National Foundation, AEA Secretary, Charyll McKean, 305 West State Rt 89A, Lot 54, Cottonwood, AZ 86326.  Made in LeRoy Lewis’ name at Kearny Lodge 2478. If you would like to donate online, you can go to Elks.org and go to “Donate to Elks National Foundation”.  Check the box that says, “this is an honor or memorial gift”.