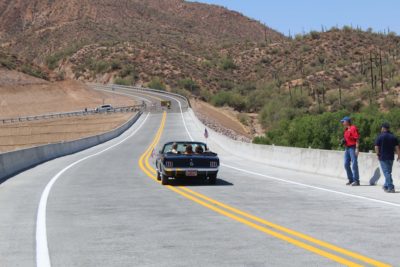 Following more speeches and the ribbon cutting ceremony, the first official car was allowed to cross the bridge. Jackie Mann and Stephani’s best friend Marcy Bryce-Mullin were chauffeured by L.S. “Jake” Jacobson, COO of Copper Basin Railway in his 1965 Mustang.

On Friday June 8, 2018, a dedication and opening were held for the Kelvin Bridge Replacement Project by Pinal County officials.

The bridge has been 20 years in the making. County officials and many of the people and organizations involved in the project were in attendance as well as people from the surrounding areas.

Todd House, Chairman of the Board of Supervisors for Pinal County, spoke about the upgrade of the bridge which the county sees as an opportunity to improve the economy and tourism for the area. The bridge spans the Gila River on the Florence-Kelvin Highway in the Kelvin-Riverside area. The road to Florence is now half-way paved and hopefully will be completely paved in the next few years. 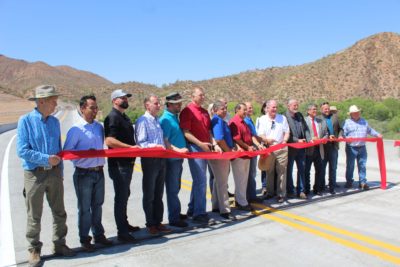 And the bridge is officially open.

County Supervisor for District 1 Pete Rios talked about the history of the bridge and the project. He acknowledged many of the people involved in the project which included former county supervisor, Lionel Ruiz, Joe Ortiz, ADOT, Grupo-ASARCO, and Copper Basin Railway. He spoke about Stephani Yesenski, who had inspired and helped unify the community through her courageous struggle with cancer. Stephani was a local girl residing in Riverside. Her aunt, Jackie Mann was in the audience and acknowledged by Rios. 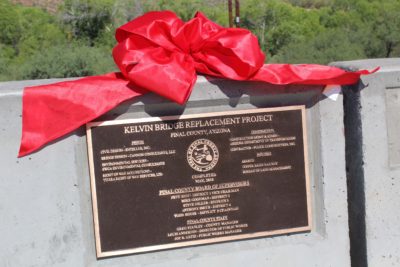 The plaque at the bridge.

Following more speeches and the ribbon cutting ceremony, the first official car was allowed to cross the bridge. Jackie Mann and Stephani’s best friend Marcy Bryce-Mullin were chauffeured by L.S. “Jake” Jacobson, COO of Copper Basin Railway in his 1965 Mustang. Jake had been inspired by Stephani and had led fundraising campaigns for her medical treatment. In 2000, he named the bridge “The ‘Jake’ Jacobson Bridge of Unity in Memory of Stephani Yesenski”. He delivered the eulogy for Stephani at her funeral in 2000. She was 20 years old when she died.

The historic bridge is now a footbridge that connects to the Arizona Trail. It was built in 1916 and is one of eight historic bridges in Pinal County that are listed on the National Register of Historic Places.