Kearny, AZ –   It’s time to think about cars. Why? It’s always time for thinking about cars! I’m starting with songs. There is a song that says, “My pappy said, “Son, you’re gonna’ drive me to drinkin’ if you don’t stop drivin’ that Hot Rod Lincoln.”  It was released in 1972. Count up the years between then and now. It’s almost 50 years old and still gives many people a reason to smile and reminisce. However, there was a version before that one, from 1955, when everybody was in love with a very big car and people definitely still listen to that first song, too. America loves her songs about cars!

There are other songs about other cars: Little GTO; Little Red Corvette;  Fun, Fun, Fun; Drive My Car; Mercury Blues; Makin’ Thunderbirds; Grease Lightning;  Get Outta My Dreams, Get Into My Car and so many more. Even when gas prices rise and people point to bikes, with or without motors, the songs remain. People sing about and listen to songs about what they love. America loves her cars!
Few things that your mothers and fathers did, grandparents did, great grandparents did still exist in a recognizable form, without having been watered down until the meaning is lost or at least become something that is no longer as family friendly as they were once upon a time. Car Shows, however, are for everyone. America loves her car shows!

You don’t have to be any particular kind of person, except the kind of person who loves to own, show off or at least admire a thing of automotive beauty to enjoy your time at a car show. You can take your family, you can come alone, you can dress up or slouch on in. Just don’t forget to polish your fender before heading out to see what all the other fenders are attached to!
There is nothing not to like about a well-planned car show. It’s like a museum of art and history that can be contributed to by anyone who has the entrance fee and something to enter, whether near broke or extremely rich.  Even people who aren’t “car crazy” often enjoy the views and pick up some surprisingly helpful information, from time to time.

On Saturday, Nov. 13, the 21st Annual Kearny Fall Festival Car Show will be held on Alden Rd. (aka: Main Street) in Kearny, from 9 a.m. to 2 p.m., with set up starting at 7 a.m.  This event, sponsored by Copper Basin Chamber of Commerce, is free to enter and open to all years of cars, trucks, motorcycles and tractors. There will be 60 sponsor awards, no classes. Sponsors will choose a car of their choice! Dash plaques will be given out for the first 150 cars.

A 2015 Challenger will be raffled and drawn the day of the show. Is there a song about this vehicle? Not to the best of my knowledge. Give it time! Contact Virgil at 480-266-8216 to join in the raffle. Cost is $10 each or six tickets for $50. You need not be present to win.
An advance purchase of an event t-shirt will cost $15. To sponsor an award and choose the car of your choice costs $30. Contact Virgil about these things, as well, both by the number given above and by email: thompson52k@hotmail.com

In the meantime, there is car wax and good music to get you in the mood to enjoy a full day of viewing all sorts of forms of steel beauty. Ask your parents, your grandparents even. They probably know quite a few ditties to sing while polishing up their favorite ride! 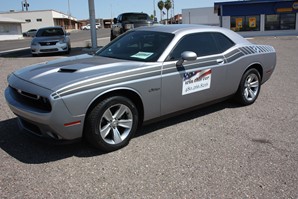 You could win this 2015 Dodge Challenger!