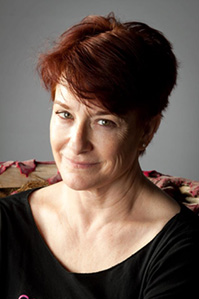 This is the second in a series about an artist whose life was shaped by her childhood in the Ray-Kearny area.

Reno, Nevada, situated a hairsbreadth from Nevada’s border with California, built its early reputation on gold mining – and later, on what many saw as sin: legalized gambling, prostitution and liberal divorce laws.  But its location also provided inspiration for Simpson’s newfound activism.  In 1989, she and fellow actor Roderick Dexter founded the Nevada Shakespeare Company – not just as a venue for performing the bard, but a deliberately conceived activist theater dedicated to theater outreach and community involvement, with programs in schools and other venues in Reno itself and throughout the state.

Although Simpson had been a committed activist for peace since the mid-1980s, the events of September 11, 2001 strengthened her resolve to stand for messages of peace in the world.

“Seeing those pictures of mothers and babies and grandparents standing in line to get out of Afghanistan when we began to bomb made my head explode,” Simpson says. “How could it be that my government turned a blind eye to that suffering?”

Simpson also had a personal connection to events in Afghanistan and Iraq: her son, Donald Paul Stockton, was in the Navy, facing a very real risk of going to war.  And although he remained out of danger during the conflict, she became more concerned than ever about the toll war takes on women and children – and all humanity.

Simpson’s creative work had also suffered in the aftermath of 9/11. The Nevada Shakespeare Company “crashed and burned” after the Trade Towers fell, Simpson says, at one point losing $65,000 in one day, because people were not going out to theater and other entertainments.  Although the Company continued, adding new shows and increasing outreach activities, it never really recovered from the losses.  At the same time, Simpson’s marriage was crumbling.  She remained the Company’s artistic director until 2008, but, she says, “I lost the Company in the divorce.”  Still, her work with the Company laid the foundation for the works she would create as an activist/artist – an “artivist.”

During her days with the NSC, Simpson had appeared in the American premiere of Shakespeare’s Will, a one-woman play written by Canadian playwright Verne Thiessen. The play, a monologue in the voice of Shakespeare’s wife Anne Hathaway, explores issues of sexual identity and freedom from convention through the perspective of a woman largely unknown to modern audiences.  Always interested in researching and interpreting characters from other times and places, after 9/11 Simpson turned again to that one-person format as a platform for her activism, letting messages of peace and social change speak through her characters and their stories.

The first of these biographical pieces about strong, unsung women was A Single Woman, based on the life of Jeannette Rankin, the first woman in Congress. A lifelong pacifist, Rankin was the only member of Congress to vote against US involvement in both World Wars.  Hers was the first of the stories Simpson would tell, presenting the play over and over again to benefit peace organizations and movements around the United States, including the Women’s International League for Peace and Freedom, the American Civil Liberties Union and the Friends Service Committee.

Simpson presented A Single Woman 263 times in two years, touring both in the United States and abroad. The show relied not just on Simpson’s performance, but also on sensory details that supported the show’s themes.   In several pivotal scenes, Rankin bakes bread — real bread which is eaten in the final scene. The smell of baking bread permeated the theater, infusing the entire performance with its homey scent.  “All the information in that play is filtered through the smell of baking bread,” Simpson says, and that bread was eaten by the audience after the play, intensifying its impact so strongly that a reviewer for the Reno News and Review likened it to digesting Rankin’s morals.

Because the presentation of A Single Woman was limited by Simpson’s ability to travel and perform, she wanted to capture it on video.  Her cousin, Kamala Lopez, offered to handle the video production. But the planned video mushroomed into a full-blown movie production, and the play closed in 2006 at the Invisible Theater in Tucson, Arizona, so that Simpson could focus on filming.

Starring Simpson herself as Rankin, the film, with Hollywood notables such as Martin Sheen, Peter Coyote and Judd Nelson on board, ran into financial and creative troubles early on and was never released in theaters. Although it won the National Women’s Political Caucus Exceptional Merit in Media Award for 2009, it never had a theatrical release and received generally poor mainstream reviews.

In a 2011 interview with Huffington Post correspondent Dylan Brody, Simpson says that the movie was “probably the biggest disappointment of my life.”  But although the film itself failed, individual scenes sparkle, such as the heated interchanges between Jeanette Rankin and a Jewish reporter (played by Judd Nelson) demanding to know why she voted against the United States’ entry into World War II.

Despite the movie venture, A Single Woman never made it to the readily accessible video format Simpson originally envisioned. But for the tenth anniversary of 9/11, she created an audio version of the play, taking its title Flight of the Dove, from the first biography written about Jeanette Rankin. Flight of the Dove is an ensemble piece which, Simpson says, documents the entire experience of creating and staging A Single Woman.