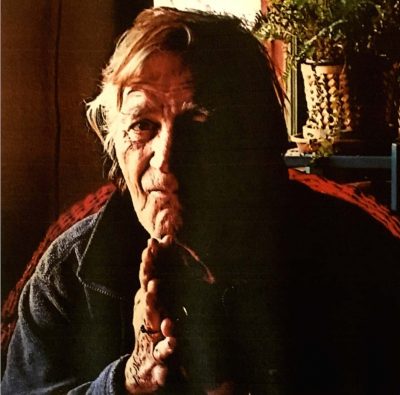 On the evening of Sept. 8, 2016, renowned artist, professor, grandfather, father and husband, James G. Davis died peacefully at home. He was surrounded by friends and family. He was 85 years old and lived a life of intensity and depth. Born in Springfield, MO in 1931, James was raised in a family of six brothers and a mother who would die when he was three.

At age 11, he was involved in a train accident that required a prolonged recovery, during which he first discovered the power of drawing and reading as a means of escape and transformation. After years of odd jobs and wandering, James was allowed entrance to Wichita State University, having never attended high school, based on his drawing and painting mastery and intellectual ability. He graduated with an MFA and, soon after, met wife, Mary Anne. In 1968, the couple moved to the artist community called Rancho Linda Vista outside of Tucson and began his teaching career at the University of Arizona. Davis inspired, challenged and influenced generations of artists. During this early period, the couple had their only son, Turner.

Davis’ rise in the art world as an important international luminary included a long list of museum exhibitions, inclusion in major publications, and gallery presentation in Europe, Canada, and the United States. During their 50-plus years of marriage, James and Mary Anne traveled the world and spent many summers on the ocean in Nova Scotia, Canada.

He is survived by wife, Mary Anne Davis and son, Turner G. Davis. He will be missed by artists, friends, and family for many years to come.