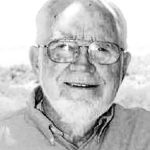 Jack was born in Missouri in 1930. His parents were ministers and they moved around some before they settled in Alabama where Jack attended school through high school and one year of college.

He joined the Air Force in 1950. Shortly after joining he contracted Polio and spent many long months in the hospital recuperating. Eventually he was feeling strong enough to go back to school and started down at the University in Miami, Florida.

He attended there another semester then he went to Chicago and he and Pat were married in 1953. He proposed at her Senior Prom! They spent one year in Miami, continuing Jack’s education and then moved to Alabama for 2 years where Tim and Sue were born.

In 1956, the family moved to Tucson and Jack was attending the University of Arizona when Casey was born. Jack received his Masters Degree from the U of A and they moved to San Manuel where Jeff was born and Jack started at San Manuel High School as the counselor.

They moved to Oracle in 1960. Eventually Julie came along and now the family was complete.

Jack remained counselor in San Manuel for over 30 years and had many wonderful memories.

Jack is survived by his wife, Pat, and his children, Timothy (Mechelle), Susan (Camille), Casey and Julie (Kurt); his loving grandchildren, Lynsi (Panch), Tyler, Jeff, Josh, Alexis, Kyle, Emelia and Caity; and his great-grandsons, Aiden, Rowen, Kain and Dylan. He is preceded in death by his son, Jeff; his sister, Awedrene; and his parents.