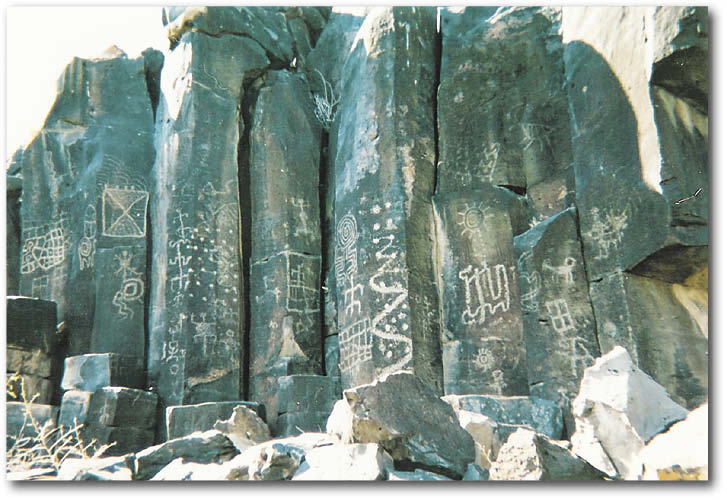 Petroglyphs at the Gillespie Dam. Gary Every | Nugget 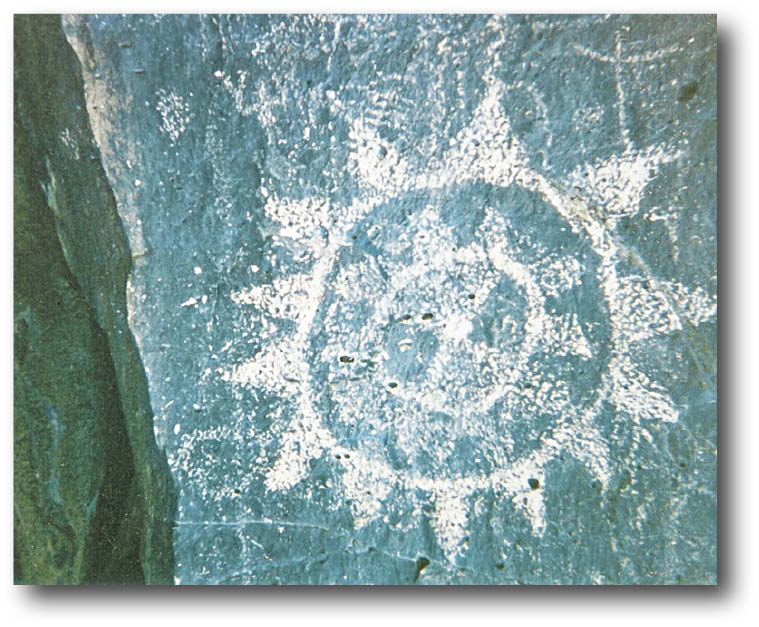 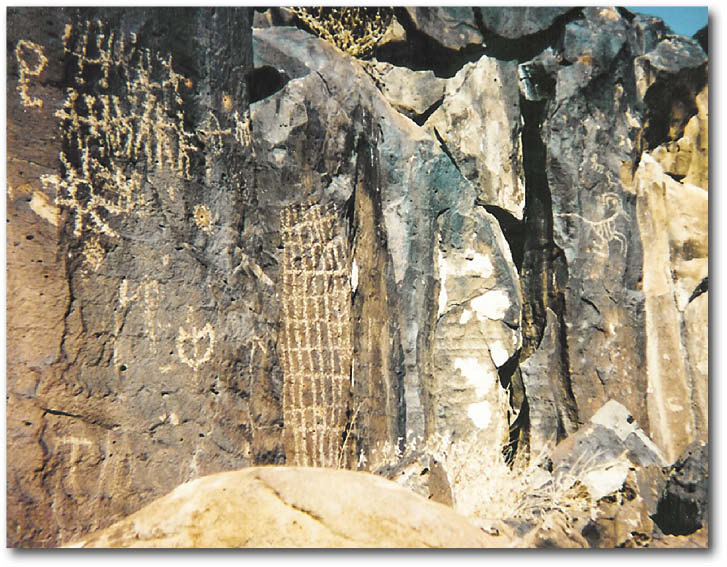 Petroglyphs at the Gillespie Dam. Gary Every | Nugget

Working geology for Mr. Acorn took me to Gila Bend, Arizona.  Gila Bend in the summertime hardly conjures up visions of paradise but it turned out to be one of my favorite geology jobs.  We were working in the shadows of Fourth of July Peak, which stands beside Fourth of July Wash where the Mormon settlers held picnics and exploded fireworks on the patriotic holiday.  We traversed across the beautiful region known as the Yellow Medicine Hills where badger holes dot the earth, geode veins lace the hillsides, and the gnarled ironwood trees wear wreaths of fragile silver flowers.  On the horizon, the Eagle Tail Mountains stand razor sharp and startling as red tail hawks scream from the sky.

One day after work, Mr. Acorn said, “C’mon, I have to show you something.”

Near the bridge over the Gila River, next to Gillespie Dam; we pull the truck over.  The Gillespie Dam was breached by a flood several years ago and never repaired, one section of the dam lying in rubble, the river running through the center.  The Gila River is pretty here; marshy trees and migratory water birds.  Mr. Acorn parks the truck atop the basalt cliffs and we wander down the hillside to discover the painted rocks at Gillespie Dam.  The rocks are not actually painted at all but pecked.

The Native American rock art overlooking the long slow bend in the river are known as petroglyphs.  The pictures at Gillespie Dam are among the most spectacular collections of petroglyphs I have ever seen including; clan symbols, animals, battle depictions, and symbols of mystery.  The Gillespie petroglyphs were first described back in 1848 by John S. Griffin, medical officer of the Emory Boundary Expedition.  The Emory Boundary Expedition took place after the Mexican American War but before the Gadsden Purchase when the Gila River defined the US – Mexican border.  Griffin wrote:

“The river here (near Dateland) is some 60 or 80 yards wide – on an average three feet deep and rapid.  We have seen more water fowl in the last two days, than we have yet met on the river – ducks, brant geese,  and swan.  The mountains still continue on our right and left, and if anything, more jagged and forbidding in appearance than any we have yet passed.  Some of them have the most fantastic forms.  Our march for the last two days has been some 35 or 37 miles – I neglected to note a stone we passed on the 16th or rather a hill of stones all carved up with Indian – hieroglyphics – the sun, moon, and stars – horned frogs … Attempts at the human form divine, were the most frequent forms – they seemed to be of recent date – whether cut in sport or to commemorate some great event we could not tell.”

The notes Griffin jotted down and his crude sketches were the first historical observations of petroglyphs in Arizona.  Some of Griffin’s notes and sketches found their way into the Garrick Mallery report Rock Art of the American Indian presented to the Smithsonian at the request of John Wesley Powell in 1889  The Mallery report claimed to be the most comprehensive collection of native American rock art ever gathered.

Arizona As It Is by Hiram C. Hodge also included a description of these petroglyphs. The section included here can be found in the highly recommended Named in Stone and Sky an anthology of Arizona nature writings.  Hodge described the petroglyphs:

“This mass of rocks rises from the surface of the plain to perhaps a height of fifty feet… On the standing ledge and on the broken masses at its base, are carved deep in the surface rude representatives of men, animals, birds, and reptiles, and of numerous objects real or imaginary, some of which represent checkerboards, some camels and dromedaries, insects, snakes, turtles, etc. etc….”

There is no official sign announcing the petroglyphs at Gillespie dam, it is far too private a place for that.  To reach the petroglyphs, drive to the west side of the river, the road winds around a hill and there is a dirt pullout parking lot only a few hundred yards from the bridge.  At the top of the cliffs there are several well worn paths which lead to the base of the petroglyphs.  The Gillespie Dam petroglyphs are so vast that at no time

are all the rock panels visible at once.  Instead one meanders around the base of the cliffs, rounds a bend and sees a whole new set of petroglyph adorned rocks.  It is a sensation much like strolling through an art gallery or museum.

Sometimes, my geology coworkers and myself would spend the time after work playing pool in the Desert Rose Saloon where the usually taciturn Mr. Acorn would tell us tales of his 40 years in geology; stories of Peruvian mountains, Mongolian deserts, Nevada ghost towns, and Yukon mosquitoes.  There was even one time when Mr. Acorn was surveying the route for a new railroad line in the heart of the Sierra Madres in Mexico when he and his work crew were greeted by a Tarahumara in full ceremonial gear who expressed the desire that the engineers survey the railroad line a few canyons over.  Mr. Acorn moved the survey.

My favorite days at Gila Bend were spent on the banks above the Gila River, trying to interpret the mystery of those petroglyph panels.  I would stroll along the base of the cliffs, ribbons of river at my back and stare at glyphs, one which might be depicting

a battle, deer, countless goats, – many of them seeming to leap from rock to rock.  When somebody asks me how I managed to entertain myself in the tiny town of Gila Bend for weeks and weeks; I tell them I spent a lot of time reading.