Arizonans are well-aware of the state’s deeply entrenched “five C’s” of industry, and since the 1800s, the big one for eastern Pinal County has been copper. Mining booms forged the foundations for many cities in the region, which has come to be known as the Copper Corridor. 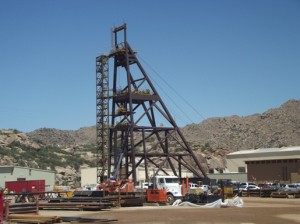 Certainly, the area has also faced its share of mining busts throughout its weathered history. However, mining remains the area’s cornerstone industry and numerous mining projects are on the horizon, promising to be economic engines and providers of much-needed jobs in the wake of economic uncertainty.

One of the biggest employers in the region is ASARCO, currently employing about 1,468 employees in the Copper Basin area. In Pinal County, the company has mining operations in Hayden, Ray and Silverbell, gathering 85 million pounds of cathode copper annually.

The company is in talks with the federal Bureau of Land Management to make a large land exchange that would most notably provide the company surface and mineral rights to land parcels surrounding their existing Ray and Hayden operations. BLM would receive 18 parcels of environmentally sensitive lands in Mohave and Pinal Counties.

At a meeting with the Superior Town Council on Sept. 20, 2012, ASARCO environmental affairs Vice-president Tom Aldrish said the deal would give the company more land and afford the BLM consolidation of its protected regions and habitats.

The town of Superior is also looking to the future for big mining prospects. Resolution Copper, a local subsidiary of mining giants Rio Tinto and BHP-Billiton, is aiming to mine a mammoth ore body three miles outside of Superior, one of the largest ever found.

The project, which is currently in the pre-feasibility phase, aims to begin production in 2021.

A 2011 economic impact study performed by Elliott D. Pollack & Company projects the Resolution Copper project to directly employ around 1,400 individuals annually when the mine reaches full production with a payroll of roughly $105 million, with an average direct annual employment figure of 1,429.

Several abandoned mine projects in the region are seeing a second life due to renewed interest and financing. Broken Hill Proprietary, or BHP, announced earlier this year that it would begin reopening the Pinto Valley mine near Globe-Miami after shutting it down in 2009 for economic reasons.

BHP initially acquired the Pinto Valley mine in 1996 when it bought out Tucson-based Magma Copper Company. The company announced in Feb. that it would inject $195 million into the revamped project, which would produce copper and molybdenum concentrate, and in turn create around 600 new jobs in the region.

Base-metals North America asset president Wayne Isaacs said in a press release that the company would restart mining operations at Pinto Valley “given the robust investment case and the potential for an extension to current reserves.”

In Florence, Canadian-based Curis Resources is pursuing permits from the Arizona Department of Environmental Quality to begin tests for the company’s proposed in-situ copper mine which the company hopes will lead to full copper production on its 160 acres of leased state trust land, which was formerly permitted by BHP nearly a decade ago.

The company is applying for a temporary individual aquifer protection permit (TIP), which would allow them to run phase 1 pilot in-situ extraction tests on two acres of Arizona state trust land.

According to an economic impact study by Elliott D. Pollack & Company, the Florence Copper Project will annually generate an average of 406 jobs within Pinal County over its three phases if approved.

At a public meeting in Florence in Jun. 2011, Curis CEO Michael McPhie said the project would provide the type of high-quality jobs that help cycle the local economy. “People that work in this industry that will be getting head-of-household jobs will buy houses here and spend money in the community,” McPhie said.

Oracle Ridge Mining, LLC is seeking to revamp its former mining operation on the north side of Marble Mountain near San Manuel. The former Oracle Ridge Mine, located on private property, is an inactive, small-scale underground copper mine that would produce approximately 140 tons of copper concentrate per day.

The mine is in the permitting and detail design stage for resuming operations and current plans include up to 240 employees bused to and from the site from San Manuel.

Freeport-McMoran Copper and Gold Inc., headquartered in Phoenix, is seeing encouraging employment numbers from its operation in Globe-Miami. By the end of 2010, Freeport-McMoran had approximately 930 employees at Miami.

According to a study by Arizona State University, the company’s Miami operation was directly and indirectly responsible for approximately 3,100 jobs across the state in 2010.

The future looks bright for mining in the Copper Corridor. Bruce Richardson with Resolution Copper agrees.

“There’s certainly been a great legacy or mining in the area, and it’s been important to the growth of the region,” Richardson said. “Projects like the Resolution Copper mine, in addition to the other projects that surround us, will play in a significant role in the coming decades.”