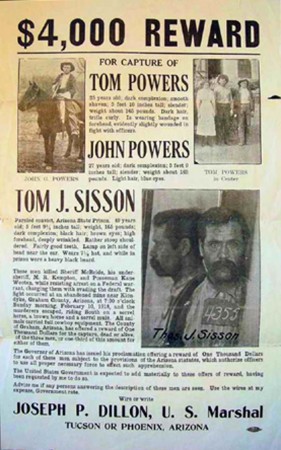 The Power Shootout took place in 1918, when a group of four lawmen went to the Power cabin in the Galiuro Mountains to arrest the Power brothers allegedly for being draft dodgers or “slackers” as they were called then. As failure to register for the draft was a federal crime, Frank Haynes the Deputy U.S. Marshal in the district traveled with Graham County Sheriff Frank McBride and Deputies Kane Wootan and Martin Kempton  to the isolated cabin.

On the early morning of Feb. 10, 1918, a gun battle took place at the Power cabin leaving four men dead: more than the gunfight at the OK Corral. Those killed in the fight were Jeff Power, patriarch of the Power family; and three of the lawmen, Sheriff McBride, Kane Wootan and Martin Kempton. U.S. Deputy Marshal Frank Haynes had fled during the gun battle, some said as soon as the first shot was fired, and reported the shooting to authorities. He would be the main witness in the trial that would follow.

The Power brothers John and Tom would flee along with their hired hand Tom Sisson towards Mexico. They would be eventually captured, tried and sentenced to prison for life. The story of the shootout, manhunt and trial is still controversial and has been written about in at least eight books.

This story is about Frank Haynes and how he would become a lawman and eventually find himself embroiled in the controversial shootout.

Frank Haynes was born in Tennessee in 1874. His father Henry was the owner of a large plantation. His father would die in 1878 leaving his wife Martha and Frank the plantation. A short biographical sketch written in 1913 in Arizona the Youngest State claimed that another child had been born but died in infancy. Numerous newspaper reports showed that Haynes visited a sister and her husband regularly in Safford. His sister was named Anna Ringer. She was the wife of J.E. Ringer, a merchant in Safford.

In 1888, the family moved to Eastland, Texas. Frank’s mother would die in 1891. Frank then went to work on a ranch as a cowboy. He continued to punch cows until 1898 when he went to work for the Texas Pacific Railroad. He was a brakeman in 1903 when he came to Arizona, settling in Globe and then moving to Bisbee. In 1903, he returned to Globe when he was hired by the Arizona Eastern Railroad. He continued to work for the railroad until 1908 when Gila County Sheriff Henry Thompson appointed him as a Deputy Sheriff.

In January 1909, Haynes was appointed as Undersheriff by Henry Thompson after J.W. “Bill” Voris retired. The Daily Arizona Silverbelt newspaper said that Haynes “is thoroughly competent to fill the position and the selection was a popular one.” The newspaper reported that Haynes once chased a horse thief for 10 days finally capturing him near the border in Douglas.

A few days before Christmas 1911, Sheriff Henry Thompson shot Mike Jurascovich the bartender of the Globe Saloon. Thompson claimed he acted in self defense. On Jan. 4, 1912, Frank Haynes was named Sheriff by the County Board of Supervisors after Thompson resigned after being indicted for the murder of Juraskovich. Thompson would later be acquitted of the charge but never run for office again.

Frank Haynes’ first year in office would be a busy one. On Jan. 12, 1912 Haynes took a posse to Hayden to help quell what the newspapers were saying was a “race war”. About 50 Mexicans and whites had attacked a dozen Japanese workers that had been brought in by the company. The mob had taken all the Japanese possessions and warned them to leave camp or be killed. When Haynes arrived, he found that the alleged “race war” had been exaggerated. He reported that the situation was under control and that the “offenders” who had driven the Japanese workers from the camp would be arrested and prosecuted.

On March 27, 1912 the Copper Era newspaper out of Morenci reported that “Sheriff  Haynes and Deputy Sheriff Eugene Shute had scoured the country in the vicinity of Gibson’s ranch” looking for two horse thieves that had shot at two deputies near Hayden. The “two men were reported to be the same two men who knocked a Chinaman in the head at Seligman, robbing him of $75 in cash and then proceeding to Phoenix where they stole two horses.”  They were last seen in Hayden headed towards Globe.

Besides chasing down armed horse thieves, cattle rustlers and dealing with angry miners, there were other dangers that Frank Haynes had to deal with in the Arizona desert. In the June 23, 1912 edition of the Tombstone Epitaph it was reported via the Silver Belt out of Globe that “Sheriff Frank Haynes after going home Monday night, was bitten five times by a scorpion. He was in a serious condition early Tuesday morning but was later reported as greatly improved.”

“Mr. Haynes discovered the scorpion up his sleeve but before he could get the insect out it had bitten him severely on the forearm. Drs. Wightman and Wiles who attended him constantly for several hours said they were compelled to work hard to pull him through but his recovery is now certain.”

A few days later Haynes and his deputies served 60 arrest warrants for violation of the anti-gambling laws in Globe and Miami. Gambling had been wide open in Arizona until 1907 when the Territory passed the anti-gambling law. The new state had adopted the law. “The warrants were issued as the result of investigations that have been underway for some time by Sheriff Frank Haynes and his deputies,” newspapers reported.

In August of 1912, Haynes and his deputy Eugene Shute traveled to Pinto Creek to investigate the killing of cattle by Indians from the San Carlos Reservation. They found that the Indians had butchered 12 head of cattle and were running cattle on the Forest Reserve. Newspapers reported that local ranchers had been complaining for sometime about the Indians stealing and killing cattle which they either brought home to their families or sold. The ranchers hardest hit were Ed Herrall, Mart Hicks, Pete Spence and Bud Odle. The problem had been so bad that the ranchers had to hire line riders to protect their stock. “Sheriff Haynes has decided that the matter of stealing of cattle is to stop.”

Haynes contacted the Indian agent at San Carlos, A.L. Lawshe and the forest ranger Taylor. They were able to get the problem worked out. Stock prices at the time showed best wintered grass steers selling at $8.50 to $9.20.

Governor George Hunt was a believer in prison reform and rehabilitation. He established a program for “honor” convicts. Prisoners from the state prison in Florence were allowed to work in or near communities doing special work projects. One of these projects was near Globe. Newspapers reported that at an honor convict work camp some of the prisoners had got drunk and in a fight. Haynes and his deputies rounded them up and held them for the prison guards. The Silver Belt newspaper reported that “Charles White a negro convict, presumably serving a life term in the Arizona state prison for murder, but in reality drunk on the streets in Globe, was arrested Monday afternoon by Sheriff Frank Haynes and is now in the county jail – sobering up.”

When White was searched at the jail, he was found holding about a dozen strychnine tablets, enough to kill a man. White said that he had bought them for another prisoner. Three other convicts had been brought over from the work camp to the jail by deputies Rawlings and Voris. The three convicts had been in a brawl. Other convicts tackled them and tied them up until the deputies arrived. One of the three men was a cook and had brought back some whisky from Globe when he had went to town to buy supplies. It was reported that there were no prison guards at the Honor Camp.

The approaching years would challenge the Sheriffs of the young state. The revolution in Mexico, radical labor unions, prohibition and the coming World War would play a big part in Arizona history and the life of Frank Haynes.