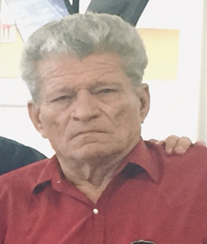 He served 2 tours in the U.S. Army in 1966-1967. He retired from ASARCO and moved to San Manuel with his wife and their grandson, Daniel.

He is preceded in death by his wife, Delores Taylor; and brother, Bruce, and sister-in-law, Toulla Taylor. He leaves behind brothers, Elton (Judy) Taylor of Tucson, Steve (Tonya) Taylor of San Manuel, Paul (Hortensia) Taylor of Tucson and John Taylor of Phoenix; a half-brother, Bill Warfe Jr. of Tucson; a half-sister, Tonja Mize of Tucson; children, Frankie, Tammy, Little Floyd, Dawn Michelle and Daniel. Floyd and his late wife also raised a grandson, Daniel. He also had three stepchildren, Sharll, Cindy and Patrick; and had many grandchildren and great-grandchildren.

He was loved and will be missed by his siblings, children, grandchildren, nieces, nephews and cousins.

A memorial service was held in his honor with Military Taps from the U.S. Army on May 14 at the Griffith Mortuary in Kearny.