You will be blown away by the artwork at SaddleBrooke’s Spring Fine Art Show in February. From oil painting,watercolor, collage and photography there is something for

Don’t be fooled that this group of talented seniors are amateurs. Many of the SaddleBrooke Fine Arts Guild members have art degrees and have been painting or collaging for upwards of thirty five years. 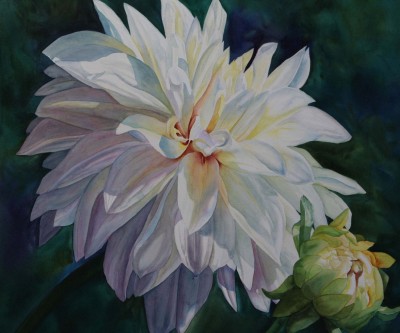 For example, one of the talented artists, Renee Pearson, received the key to the City of Boston from the Mayor when she was a mere 13 years of age for one of her watercolor paintings. Since then Renee has garnered awards and sold her paintings to people all over the United States.

Most recently Pearson received her third  Award of Excellence from the Southern Arizona Watercolor Guild for her painting “White Dahlia”, shown above. It will be featured at the upcoming show. Whether she is painting a watercolor floral, still life or landscape, she paints light which is translated into color and form, set off by the white of the paper.

“The patterns and shapes created by light and shadow give me inspiration,” said Pearson. 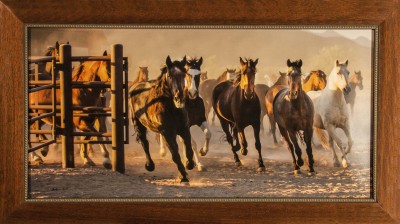 Another artist showing at the February event is Dolores Root, who has been involved in photography since her twenties. In the 90’s, Root was given an opportunity to study

Photoshop Program. On top of that she taught herself Lightroom to enhance her already fine photographs. Upon moving to SaddleBrooke in 2003, her subject matter became the desert. About this time she also switched to using a digital camera. During a workshop at Arizona Highways at White Stallion Ranch, Root shot her signature piece, “Stampede”.

Dolores has been the recipient of many awards over the years. Most recently, she won second place at the Oro Valley Community and Restaurant Art Show. Her lovely cards and framed photos,”..capture nature, landscapes, flora, animals for others to experience and enjoy.” Root said, when describing her inspiration. 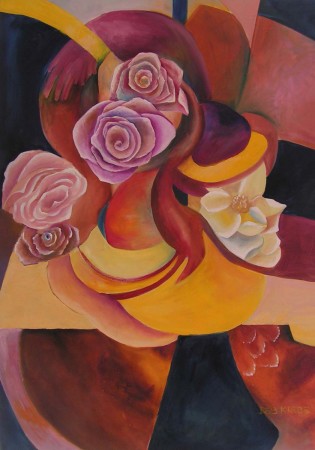 Last, but, not least, a mention must be given to the inspired work of artist Deb Kresnika. Creating from a variety of subjects, with a variety of media, Kresnika emphasizes a mood with a message, offering eye candy to dazzle the viewer while giving, as well, something for them to contemplate.

“My inspirations come early in the morning and eventually a collage develops with layers and layers of altered paper,paint and acrylic mediums,” said Kresnika.

While working along side Laura Lin Spencer at an Illinois art gallery, Spencer founded the Midwest Collage Society in order to promote collage as a fine art medium.

“It all started with a study of Picasso and Georges Braque in high school. They heralded the birth of collage in modern painting over one hundred years ago,” Kresnika said.

One of three featured artists at the Kerr Cultural Center in Scottsdale, Kresnika was commissioned to do two pieces to be included in “On Mission” magazine. She also

participated in the Layer II Exhibition sponsored by the Midwest Watercolor Society at Elmhurst Art Museum in Chicago. On top of that, she has just recently published a book “One

Bear and Ten Dogs”…so that people can “enjoy my plein aire sketches and collages from around the world,” said Kresnika. The book is dedicated to all her animal friends.

For directions or more information regarding the show, you can contact Sandy