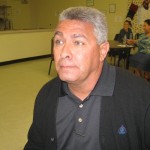 Feb. 21 is the new date when former Superior Mayor Jayme Valenzuela will go to trial on charges that he used the town debit card to make more than $2,300 in personal withdrawals during his term in office.

Originally scheduled to begin on Dec. 20, Maricopa County Superior Court Judge David Cunanan granted a continuance at the request of Valenzuela’s defense attorney Gary Husk. No reason was given for requesting the postponement.

Following a final pretrial conference on Feb. 13, the trial is now expected to begin on Feb. 21 in Arizona Superior Court, 175 W. Madison in Phoenix. The case will be prosecuted by Assistant Attorney General Sheila Madden.

Valenzuela stands accused of one count of theft (a class 5 felony) for making eight personal withdrawals totaling more than $2,300 from the Superior town debit card between August 2013 and December 2014. The withdrawals were made public in December 2015 by former Superior Town Clerk Rachelle Sanchez in testimony at a meeting of the Superior Town Council. Her report was later verified by the auditing firm of Colby & Powell LLC and the Special Investigations Section (SIS) of the Arizona Office of the Attorney General.

The SIS investigation, as reported last summer in the Superior Sun, alleged that Valenzuela carried the town debit card with himself instead of returning to the Superior Town Hall between uses as is policy, and used the card on eight occasions when his personal banking card was low on funds. These transactions were not reported.

The SIS report charged that the reason Valenzuela’s personal banking card was low on funds was due to an addiction to gambling. It is alleged that two of the transactions were at an ATM in the Wild Horse Pass Casino in Chandler.

Valenzuela has already paid a price for his actions. Following his indictment on theft charges in early July 2016 he was terminated from his high-paid job as a commander overseeing contracts and supplies at the Pinal County Detention Center in Casa Grande. Voters in Superior also removed him as mayor in a recall election last Aug. 30.