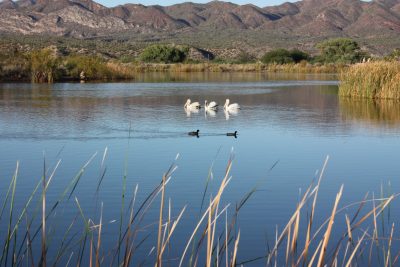 The Kearny Lake is one of the assets of the Copper Corridor. Photo by James Carnes

Are you ready to welcome tourists (and their spending)?

A collaborative effort to create a marketing plan to promote the Copper Corridor in Eastern Pinal County as a tourist destination for outdoor and recreational activities has been launched by community leaders and businesses in the region. The purpose is to create new local economic activity in the region.

The effort follows the issuance of a report that indicated potential economic, social and environmental benefits could result from promoting tourism in the area from Superior in the north to Oracle in the south. Published in late 2016, the report was conducted under the supervision of Dr. Christine Vogt, director of the Center for Sustainable Tourism at Arizona State University, with an assist from the Arizona Office of Tourism, for the Copper Corridor Economic Development Coalition (CCEDC). 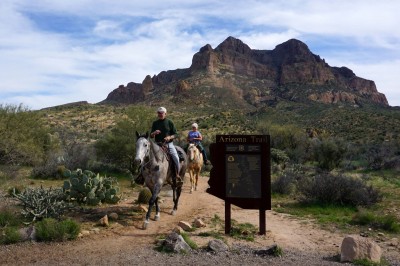 The Legends of Superior Trail offers plenty of room to hike, bike or even ride horses.

The chief finding of the report was that the Copper Corridor, with its high desert rocky terrain, mountain vistas and abundant wildlife, is a prime area for a more robust tourism and recreation economy. It is thus poised to become a regional destination for outdoor recreationists, including Arizona Trail hikers, off-highway vehicle riders on public lands, community event attendees, and visitors seeking a getaway from the Phoenix and Tucson metropolitan areas.

Building tourism would especially benefit the 11 communities in the Copper Corridor hurt economically in recent years by reductions in the mining industry, making them ripe for economic diversification and revitalization. 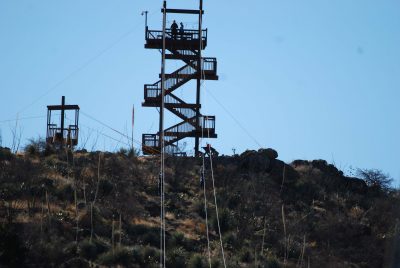 The Arizona Zipline Adventures near Oracle.

The Copper Corridor has much to offer tourists, the report noted. These include the Boyce Thompson Arboretum, the Biosphere, Arizona Zipline Adventures, Tonto National Forest and Oracle State Park. The Arizona Trail, Gila River, Aravaipa Canyon, and federal and state lands provide recreational opportunities for both novices and advanced off-road tourists. The area has great natural beauty with state roads 77 and 177 already declared scenic routes by Arizona. And many communities along the Copper Corridor stage events and festivals that already attract people from outside the area.

A grant has been secured by CCEDC from the U.S. Department of Agriculture to funds development of a tourism marketing plan and other projects.

CCEDC and its partners have already begun promoting tourism in the area by developing a website and printing and distributing brochures both locally and statewide. But according to ASU’s Vogt, more can be done to create and promote art, culture, history and recreational programs and events in the area. This should include tourist destinations cross-promoting each other, expanding events with the Arizona Trail to attract more short and long distance hikers, sending press releases on events to state and city magazines, and offering tours of the area to journalists who write for the travel sections of their publications, she said.

But the report noted weaknesses that need improvement to generate a robust tourism economy. These include a deficiency of retail businesses to attract tourists and capture spending, a lack of resources to improve streets and aging infrastructure, slow broadband access, and low use of social media by area communities.

The area also needs for overnight accommodations, Vogt stressed. These include more short-term and long-term camping areas along with inns and similar facilities, to not only attract tourists but generate tax revenues to fund tourism efforts, she said.

As for lodging along the Copper Corridor, there are currently 11 properties with 150 rooms in Superior, Kearny, Mammoth, San Manuel and Oracle, the majority of which are on the southern edge of the region. Of these accommodations, only the General Kearny Inn is rated on the YELP website (five-star highest rating). 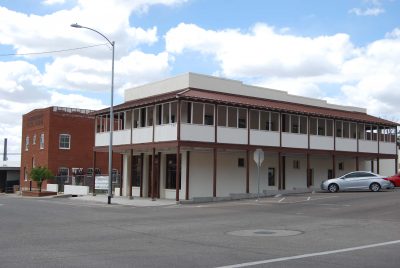 To remedy the lodging situation in northern Copper Corridor, efforts are underway to reopen the Magma Hotel in Superior this year, and to attract another RV park to Superior to replace the one supplanted last year by the Circle K gas station on U.S. 60 near Main Street, according to Nancy Vogel of the Superior Chamber of Commerce.

Additional lodging rooms will be available once the Apache Sky Casino opens near Dudleyville, which also will figure in tourism promotions to the region.

Camping is available in the backcountry in Tonto National Forest and Aravaipa Canyon, along with some private campgrounds.

“Another remedy to the lodging shortage would be to encourage more residents to offer their homes for weekly leases through Airbnb or a similar service,” Vogt said.

The report suggests that Copper Corridor tourism be promoted to several distinct groups. These include Winter Visitors who congregate in the East Valley of Phoenix or north of Tucson, to engage in hiking, off-road driving, horseback riding, visiting state parks, and attending events like the Superior Home Tour. Residents of the Phoenix and Tucson areas who can be attracted to engage in the same activities all year. Outdoor Recreationists can be attracted all year, though work with public land agencies in needed to provide better way-finding signage and ensure easy access would increase the number of hikers, ATV enthusiasts and horseback riders. Day Trippers can be attracted to special events like Apache Leap, Pioneer Days and Glow, of which food and local handmade merchandise can generate revenues.

The hardest group to promote will be Millennials, who comprise the smallest group of people visiting the Copper Corridor. The report suggests more research to determine what attracts Millennial tourists and then incorporate them into the area’s offerings.

To get the tourism effort going, the report suggests partnering with the business community to promote downtown redevelopment, beautification and technical business assistance. It also suggests partnering with government and nonprofit organizations such as Local First Arizona to secure necessary support for promoting tourism and recreational activities. And the U.S. Forest Service will play a major role in public access for recreation and future development and maintenance of facilities like nature trails and campgrounds.

The report further noted that while the major market for tourism will be from fulltime residents of Phoenix, Tucson and their suburbs, additional promotions can be aimed outside Arizona to winter and convention visitors. Due to their presence among the winter snowbird crowd, residents from the western provinces of Canada also can be targeted as potential tourists.