A plea for new members and a new board of directors for the Copper Basin Chamber of Commerce was well answered.

More than 55 people attended the reorganizational meeting June 6 at the General Kearny Inn. The meeting was an attempt to encourage an increase in membership and elect additional board members.

After Bill Dunn (who was serving as advisor for the reorganization) explained the By-Laws, he asked if anyone attending would be interested in joining the board. Five people put themselves forward for election and were unanimously added. They are: Emelia Rutledge, Gary “Bud” Stepke, Jeff Gregorich, Shane Olsen and Denise Robenalt.

But there couldn’t be a meeting without door prizes and a raffle. Winner of the membership raffle was G&J Restaurant, and the door prize winner was Annette Berumen. 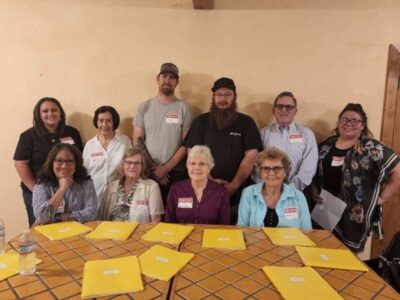