On Saturday, Aug. 6, seven wrestlers from the Tri-Community traveled to Scottsdale to compete in the Grand Canyon Wrestling Championships which were held at WestWorld of Scottsdale. Wrestling under San Manuel’s Comet Wrestling Club were Sean McDermott, Angel Renteria, Fernando Aragon, Aedon Hawkins, Johnny Arbizo, and Raymond Garcia, being coached by Vince Majalca, and wrestling unattached was D.J. Small. The Comet wrestlers wore singlets previously used by the University of Arizona’s wrestling club.

“They came to this tournament with the understanding that, this is the first step to becoming better competitors for this upcoming regular season,” commented coach Vince Majalca.

“They did their community proud, and were even better sportsmen off the mat,” said Vince Majalca. “They shared their technique with other wrestlers, and Johnny Arbizo and his family went as far as to summon me to coach a wrestler in the children’s division that had no coach and had never competed before. They watched his matches and Johnny even shared wrestling tips with him. I am beyond proud of these young gentleman and how they performed in this tournament.” 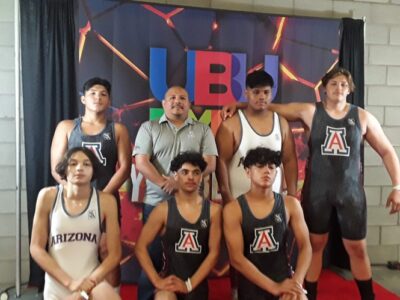