Buffalo Soldiers and the Brownsville Affair 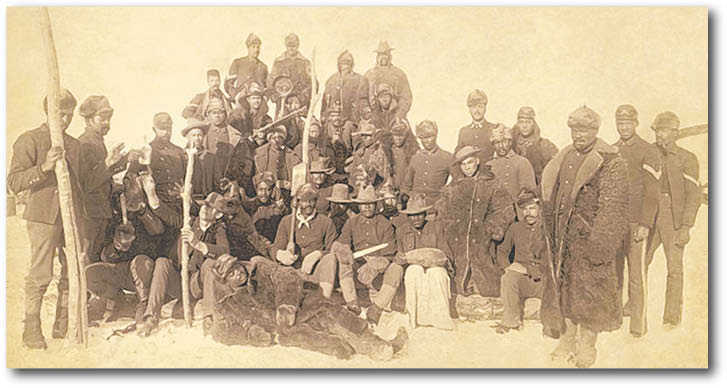 February is Black History Month. This month was chosen to honor the births of Abraham Lincoln and Frederick Douglas. Douglas was a former slave who became a leader in the abolitionist movement. He was a writer, newspaper editor and orator who wrote and fought for civil rights and against racism. President Lincoln, we know, freed the slaves in 10 states of the Confederacy that had rebelled against the Union with his Executive Order known as the Emancipation Proclamation in 1863. This would set the stage for the passing of the 13th Amendment that would abolish slavery in the United States in 1865. The Emancipation Proclamation also allowed for freed slaves to join the United States military. During the Civil War 200,000 blacks joined the Union Army. They would serve in segregated units. The segregation of blacks in the military would continue until 1948 when President Truman issued Executive Order 9981 forbidding discrimination against military personnel based on race, color, religion or national origin.

African Americans have fought and died for our country from the Revolutionary War to the present. They not only fought this country’s enemies but had to fight prejudice, segregation, and ignorance as well. Following the Civil War in 1866, six black regiments led by white commanders were formed. They would later be consolidated into four regiments, the 9th and 10th Cavalry and the 24th and 25th infantries. Originally the 10th Cavalry formed at Ft. Leavenworth, Kansas and would earn the name Buffalo Soldiers during the Indian Wars in the west. It would then be applied to all of the black regiments. Although historical sources disagree about how they got their name, it is believed that it originated with the Cheyenne warriors in the winter of 1867.

The story told was about a 10th Cavalry soldier Private John Randall who was assigned to guide two civilians on a hunting trip. While hunting, they were attacked by 70 Cheyenne warriors. In a running gun battle the two civilians were killed and Randall’s horse was shot out from under him. Randall was able to run and find some cover in a washout underneath some railroad tracks. Although wounded and armed only with his pistol, he held off the warriors until troops arrived. The Indians fled when they saw the troopers approaching. The soldiers found Randall alive with a bullet in his shoulder and 11 lance wounds. Thirteen Cheyenne warriors lay dead. He would survive to fight another day. The Cheyenne began telling stories about a new kind of soldier “who had fought like a cornered buffalo” and had “thick and mangly hair like the buffalo”.

The Buffalo Soldiers would fight in the Indian Wars on the Great Plains and in the southwest. They would also fight in the Spanish American War, the Philippine Insurrection, World War I and World War II. They policed the National Parks before there were park rangers and patrolled the Mexican Border before the Border Patrol was formed. They participated in the hunt for Pancho Villa under General John “Black Jack” Pershing who would become general of the armies in World War I. Pershing got his nickname of Black Jack from serving as a Lieutenant in the 10th Cavalry. He was known to praise the black troops and treated them with professionalism. While teaching at West Point, Pershing was unpopular with the cadets because he was a strict disciplinarian. The cadets and other military officers knew of Pershing’s service commanding black troops. They took to calling him “N****r Jack”, a racial slur behind his back. It would be softened to Black Jack although the intent was still meant to be disrespectful.

When the Buffalo Soldiers were first formed, many white military officers did not want to serve with them. Some that did were prejudiced and treated them poorly. The troops also put up with being supplied with second rate weapons and equipment as well as old worn out horses. Despite this, from 1867 to 1898 they received the most Congressional Medals of Honor and had the lowest desertion rate of any regiment in the U.S. Army. In many of the areas where they were assigned, the Buffalo Soldiers faced racial discrimination from the civilian population. This was especially true in former confederate states. On July 28, 1906 the 25th Infantry arrived at Fort Brown near the town of Brownsville, Texas along the Mexican border.

As soon as the soldiers arrived they faced discrimination and racial prejudice. Segregation was legal in Texas at the time. Soldiers who had entered local saloons looking for a drink were told the bar only served whites. Racial slurs taunted them on the streets. Two soldiers were assaulted by a white man for walking on the sidewalk in what he felt was too close proximity to a group of white women. The man knocked one of the soldiers down from behind by striking him in the head with the butt of his pistol. He then threatened to shoot both soldiers if they did not leave town. A Buffalo Soldier would get into a fight with a store owner.

On Aug. 13 a white woman alleged that a black man in a khaki uniform had grabbed her by the hair although she managed to get away. Threats were allegedly made by the woman’s husband that Negro soldiers would be shot on sight if caught on the streets of Brownsville. Tensions were running high in Brownsville which was only about 400 yards from Ft. Brown. Major Penrose, commanding officer at the fort ordered a curfew and confined the 25th to camp grounds unless on official military business or they had a pass. All soldiers were required to be in the fort by 8 p.m.

Around midnight on Aug. 13-14, gunfire erupted in a business section of town. One white man was killed outside of a saloon and a Hispanic police officer was seriously wounded. The townspeople blamed the shooting on the Buffalo Soldiers. They claimed that over a dozen soldiers attacked the town indiscriminately firing between 100 and 200 shots into the buildings aligning the street. The soldiers at the fort aroused by the sound of gunfire began preparing to defend the fort.

During an investigation of the alleged incident, Major Penrose said that all soldiers at the fort had been accounted for as well as all the rifles in the armory. The guns had also been checked to see if they had been fired recently with negative results. Penrose said that all the men at the fort had denied involvement or knowing anything about anyone leaving the fort to go into town. The people of Brownsville called out for further investigation by state authorities and letters were sent to President Theodore Roosevelt asking him to look into the matter and remove all the black soldiers from Fort Brown.

Captain McDonald of the Texas Rangers was sent to investigate and said that he had 12 suspects including the soldier that had been assaulted on the streets in Brownsville. He turned in his investigation to state officials. The investigation results were submitted to a grand jury but they refused to indict the suspects. McDonald persuaded a judge to issue arrest warrants for his 12 suspects. Major Penrose refused to turn over his men fearing they could possibly be lynched.

A federal investigation was ordered by President Roosevelt. All 167 soldiers were questioned, and even though they were threatened with being discharged from the service, they said they were not involved and had no knowledge of anyone leaving the fort to go into town. The report came back stating that there was a “conspiracy of silence” among all the soldiers of the 25th Infantry. President Roosevelt in an unprecedented action ordered all 167 black soldiers dishonorably discharged. Most of these men had been in the army over five years. A number of them had over 15 years of honorable service. Six of the Buffalo Soldiers had been awarded the Congressional Medal of Honor, the nation’s highest award for valor. A court-martial was ordered for Major Penrose and Captain Macklin, white officers of the 25th for negligence of duty. They were both acquitted.

Black leaders and some white congressmen tried to get Roosevelt to change his mind but he refused. He was reminded that the Buffalo Soldiers had fought at his side in Cuba, including the famous charge up San Juan Hill. Some historians believe the Buffalo Soldiers were actually the first troops to charge up the hill and they bore the brunt of the fighting, although Roosevelt and his volunteer “Rough Riders” would get the credit. W.E.B. Dubois, a civil rights activist, author, and one of the co-founders of the NAACP urged African Americans to register to vote and remember Roosevelt and the Republicans during the next election.

Texas congressmen and a few others from the south would attempt to pass legislation to remove all African Americans from the military and ban them from future service but the bills would fail. In 1909 after government hearings, 14 soldiers from the 25th would be approved to reenlist. In 1972, congressional hearings were held which exonerated the Buffalo Soldiers of the 25th Infantry from the charges brought against them. It also acknowledged that they had never been granted their due process rights. Although most of the soldiers had died, two survivors received a small cash settlement and a pension. A few widows also received survivor benefits.

On July 25, 1992 a Memorial Park consisting of the Buffalo Soldiers Monument, Circle of Firsts, and the Walkway of Units which commemorates the significant “firsts” in the history of African American soldiers and units in the United State’s Army was dedicated at Ft. Leavenworth, Kansas. General Colin Powell, chairman of the Joint Chiefs of Staff and the first African American to serve in that position led the dedication. He acknowledged that without the Buffalo Soldiers he would never have come as far as he had in his career. He said, “The powerful purpose of this monument is to motivate us. To motivate us to keep struggling until all Americans have an equal seat at our national table, until all Americans enjoy every opportunity to excel, every chance to achieve their dream.”