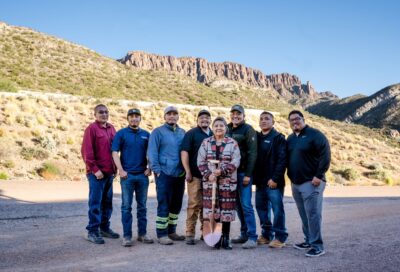 “Over the past several years, AMA members have increased their efforts in safety practices and environmental protection, thereby raising the standard for SPADE excellence,” stated Steve Trussell, Arizona Mining Association Executive Director. “AMA is honored to present the SPADE award to Resolution Copper for their partnership with the US Forest Service, NAU and Western Apache Tribes  in restoring the Emory Oak that will nourish Native American Communities for future generations.”

Resolution Copper began a multiyear partnership with the Tonto and Coconino National Forests (TNF and CNF), Northern Arizona University (NAU), and Apache Tribes in Arizona to create the Emory Oak Collaborative Tribal Restoration Initiative in response to concerns voiced  by Western Apache Tribal elders that the health of Emory Oak groves is declining, with fewer and fewer acorns produced each year across Arizona.

The Emory Oak is a culturally significant tree to the Western Apache people.The acorns provide a traditional food source and in addition to other cultural and ceremonial uses. In recent years, drought, fire suppression, livestock over-grazing, species competition, and climate change have circumvented the growth of new Emory Oak seedlings and the production of acorns. The Emory Oak project partners with the Yavapai-Apache Nation, Tonto Apache Tribe, and White Mountain Apache Tribe (WMAT), with assistance from San Carlos Apache tribal elders, to research the protection and restoration of Emory Oak groves across Arizona.

A fundamental component of the program involves transferring traditional ecological knowledge from elders to youth through education and collaboration. The Emory Oak project has sponsored multiple public education efforts, from planting Emory Oak saplings to training, outreach, and developing research papers and presentations. The program also aims to create a record of the traditional ecological knowledge used to manage the Emory Oak ecosystems so younger generations can access it in the years ahead.

“We are grateful for the collaborative partnership between the US Forest Service, NAU and Western Apache Tribal elders. Indigenous Traditional Ecological Knowledge has guided every aspect of this work from identifing priority Emory Oak Groves to implementing best practices on the ground to preserve a critical aspect of Western Apache culture. By acknowledging, respecting and listening to the voice of Western Apache Tribal elders, mining companies can play a role in preserving this important species.” – Victoria Peacey, Acting Project Director, Resolution Copper.

Resolution Copper recognizes the importance of this legacy project and what it means to the Western Apache people. The company is grateful to deepen our consultation and partnership with Native American tribes to continue shaping the project, the benefits it can provide and the co-management and preservation of cultural heritage.

Resolution Copper is developing one of the largest copper deposits in the world in Superior, Arizona. The company plans to operate a 21st-century mine while protecting and preserving the area’s unique natural surroundings and cultural heritage.

Learn more about the Emory Oak Collaborative Tribal Restoration Initiative by viewing this video created by the US Forest Service, https://youtu.be/00BWCCSlO9Q.