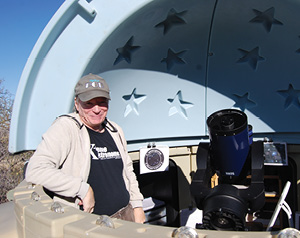 Mike Weasner first got interested in astronomy when he was six years old. His older brother Paul would take him out in the backyard and show him the Indiana night skies. Paul taught him about the sky pointing out planets and constellations to young Mike.

Mike grew up in Seymour, Indiana. In 1961, Mike’s mother gave him an Edmund Scientific three-inch Newtonian telescope for Christmas. He now had a closer view of the sky.

Although Mike has gone to bigger and better telescopes he still uses the three-foot telescope on occasion. When Mike was 14 years old, his brother Paul got him a subscription to Sky & Telescope magazine. He has not missed an issue since the day he received his first magazine.

In fact, he has 40 years worth of these magazines stored away in his collection. He then became an active amateur astronomer.

In 1964, Mike’s brother got him interested in science fiction. Mike likes all the classic sci-fi authors like Asimov, Clarke, Heinlein, Bradbury and more. As an adult he would meet and get to talk with Ray Bradbury while living in California.

Mike says that he saw a UFO when he was a teenager. By that he meant that he saw a light in the sky making unusual movements that no known aircraft on earth could make. As for the possibility of life on other planets, with billions upon billions of stars in the universe, Mike said, “odds are, we are not alone.”

One day he watched some planes refueling in mid-air through his telescope. Little did he know that one day he would be in the air doing the same thing.

After high school, Mike attended Indiana University in Bloomington where he received his B.S. in Astrophysics. While an undergraduate, he was able to use Indiana University’s Kirkwood Observatory and their 12-foot refractor telescope.

Kirkwood Observatory is over 100 years old. Mike did his graduate work in meteorology at the University of Wisconsin. After graduating, Mike found another way to observe the sky. It would be from the cockpit of a plane.

Mike enlisted in the United States Air Force and flew the A-7D Corsair II as a fighter pilot and was an instructor for the T-38 Talon. He would also work as a manager with the Air Force Space Shuttle Program.

After eleven years in the Air Force, he took a job as a Systems Engineer in the aerospace industry in California, where he would later be in management. He also was a civilian flight instructor for a while, though he no longer flies.

All this time he still had an interest in astronomy but was unable to be as active as he wanted. In 1996 he purchased a Meade ETX-90 telescope and became active again.

Two years ago Mike was interviewed by the New York Times about his work using iPhone space photography through a telescope. He was one of the first to do so on a regular basis.

He has also written a book, Using the Meade ETX Telescope, which was published by English publishing house Springer-Verlag.

Mike purchased his retirement land in Oracle in 2004. He and R-Laurraine Tutihasi wanted to live in the desert in a rural area but close enough to a city for cultural activities such as plays and operas.

Mike had been stationed at Davis Monathan Air Force Base 30 years ago and was amazed how Tucson had grown. Mike fell in love with the dark skies, visiting the property site and bring his telescope.

After moving to Oro Valley in 2007 while their house was built, they moved to Oracle in 2009. Mike was more active in astronomy and it was always his dream to have his own observatory. He purchased a Skyshed Pod from a company in Canada.

“First Light” for the Cassiopeia Observatory was on Wednesday August 19, 2009. First Light is the first time that a new telescope views its first image of the universe, a very exciting time for an astronomer.

The Cassiopeia Observatory was named for the constellation Cassiopeia. Mike chose the name because the brightest stars in this constellation form the shape of the letter “W” in the sky and at other times of the year it will look like the letter “M”. M and W: Mike Weasner!

The observatory has a Meade eight-inch LX200-ACF telescope. Mike also has a number of other telescopes that he uses. While looking at the stars, Mike likes to listen to classical music or science fiction movie soundtracks. He also enjoys listening to the old radio broadcasts from the 30s and 40s like the Lone Ranger and X Minus One.

Mike also has a website for the observatory where he shares information and his magnificent photos of the universe. The website is www.weasner.com.

Mike enjoys sharing his love of astronomy. He has worked a booth at the Arizona Science & Astronomy Expo showing telescopes and the SkyShed Pod. He will be at the 2013 Expo on Nov. 16 and 17 at the Tucson Convention Center.

Mike can be reached at mweasner@me.com. His Twitter handle is @mweasner.