The Ghost at Copper Creek Mansion 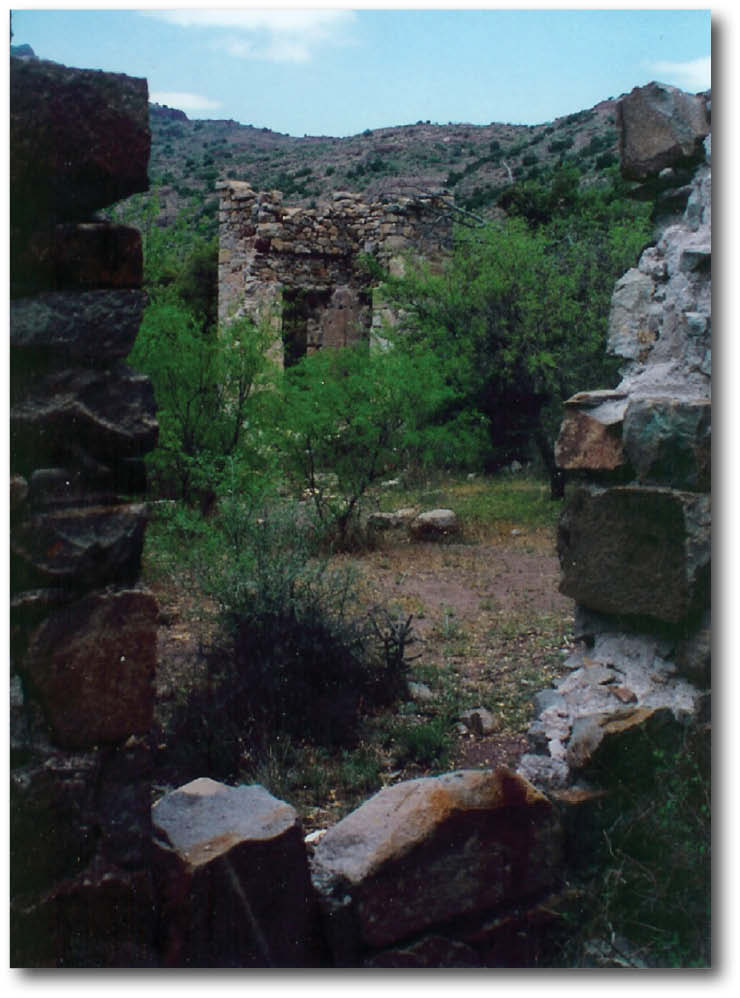 As one approaches the mansion ruins in Copper Creek Canyon a gasp of wonder is inescapable. The beautiful stone masonry towers stand above the foliage like the parapets of a lost medieval castle. This is merely the introduction though, to what remains of the Sibley mansion in the Galiluro Mountains.

Dating back to 1863, the mining town of Copper Creek reached its zenith at the turn of the century with about 200 residents. The mines closed in 1917; then the discovery of a molybendum deposit caused mining to restart in 1933 and it lasted for three years. It is estimated that over 37 million tons of copper, lead, and silver were extracted from the area.

Copper Creek is 10.2 miles from the Town of Mammoth along the rough and rugged Copper Creek Road which eventually leads to the foundations of the old post office. There is a large concrete plaque with the name of the town written in blue and a silted dam is near. The dam was built in 1908 and water trickles from the stone wall, covering the masonry in flowers, greens, and moss. Beneath the dam is a small lagoon like pond which supports several large shade trees.

We park the truck near the dam and continue the last couple miles on foot. We walk along a dirt road which parallels a small stream all the way to the mansion. As we walk along the road, following the stream bed, the sound of running water soothes our ears. Abandoned miners cabins, rickety wooden bridges, a rusted steam generator lie along the trail. It is likely that the steam generator was used in a milling operation because the immediate vicinity is littered with bright green and blue rocks. Brian rock hounds here and discovers samples of copper, malachite, and chrysocolla.

In honor of the prospectors who have preceded us, Mark unveils his metal detector and searches the area. He finds a butter knife. Mark calls me later when we get back to town to inform me that the kitchen utensil treasure he discovered is made of sterling silver.

We leave the steam generator behind and resume our stroll along the road. Our journey takes us past several small waterfalls, the sound of the current changing in pitch and rhythm. The stream bed is lined with red Indian Paint Brush flowers as well as yellow and white Cowboys Fried Egg flowers. Animal tracks are indented across the sand and we debate what manner of beast they belong to; one set of footprints unmistakably belonging to a raccoon. Hidden in a nest on the ground we discover a quail’s egg.

Roy and Belle Sibley came to Copper Creek in 1900 when the Galiluro mining camp was in its boomtown years. Roy was there to manage the mining interests of his brothers. Belle became the first postmistress in 1907. The Sibleys began construction on their mansion in 1908 in the hopes that it would impress visitors into making substantial monetary mining investments.

The craftsmanship is exemplified by the remaining stone masonry. Although the Sibley mansion has been abandoned for nearly a century much of the 3,000 square foot structure is still standing. Two stone towers at the buildings front still exceed the height of the surrounding trees and are accented by long, rectangular window frames near each corner. The mansion sits on one bank of the stream and the remains of another large stone building are located on the opposing side. This building appears as though it could have been the hired hand quarters or perhaps a stable. As soon as the mansion was abandoned much of it was scavenged and carted back to the Town of Mammoth as building supplies; including the oak floors. The stone masonry was too heavy to move and I imagine those fortress like walls will be standing for quite some time.

The ruins are at a juncture of many canyons; several watershed drainages coming together at this spot.  The forest here is thick with scrub bushes – some with thorns. It is an enchanted looking patch of forest with the stone parapets poking out of the trees making the Sibley mansion look like a medieval castle.

Every castle needs a ghost and for the Sibley mansion that ghost would belong to the soul of eccentric poet Martin Tew. Tew arrived in Copper Creek in 1902 and was a mining engineer, lawyer, teacher, and poet, and he remained in Copper Creek long after the post office closed in 1942. According to Arizona ghost town expert Phillip Varney; Martin Tew was rumored to have paused at scenic spots and posted pieces of paper containing written verses of his poetry. Some say that during lonely windy evenings, when the wind is blowing hard enough to shake the branches of the trees against the mansion walls, it may be possible to see the lost soul of Martin Tew still roaming the Galiluro hillsides, his ghost reciting beautiful poetic descriptions of Copper Creek Canyon.

Editor’s Note: The property where the Sibley Mansion is located is posted no trespassing. If you want to visit, you must gain the permission of the owners.