The leadership and members of the Veterans of Foreign Wars Post 3584 continue to serve their country by serving the unique needs of Veterans in Superior and the surrounding area.

One of the key efforts they are leading is working on community service projects with the  Town of Superior Youth Council and the Junior High Student Council.  Members of the Post also helped to gather prizes and assisted with the Halloween Trunk or Treat event with the Youth Council. 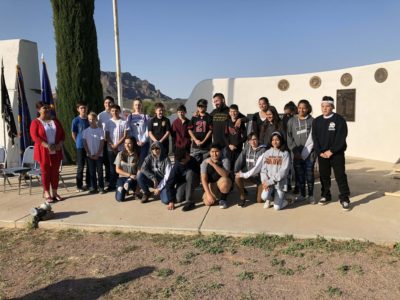 Superior Youth Council with members of the Superior VFW.

Through the mentorship of their sponsor, Valarie Garcia and Post leadership, they coordinated a community work day to prepare the Fairview Cemetery Veterans section for the Veterans Day ceremony.  During the ceremony, local youth were invited to speak about what service means to them.  Seventh Grader, JP Tomerlin, spoke about his uncle who served in the military and how he was his hero.  High School Student Body President Augie Hing spoke about how veterans make continual sacrifices and the courage it takes to be a veteran.  Youth Council President, Nathan Taylor, thanked the veterans for their service and their courage.  The VFW ceremonies, provide the young leaders with a chance to polish their public speaking skills and learn about the service of Veterans.

In addition to the Veterans Day festivities, the Post honored a local Veteran, Kent Stevens, during a Spaghetti Dinner fundraiser for the Post at Fitz Cafe in Queen Valley.  Stevens was honored for his unwavering support and respect for his fellow veterans.  He was recognized with a certificate by the Post.  His family was also recognized for their help and leadership throughout the community.  The Stevens family regularly hosts fundraisers for non profits at their restaurant Fitz.  Local band, “Copper Cactus Ranch Band” played for the crowd at no cost to support the event.  Band members are Bobby Cook, Rich Homan, Cecil Fendley, Chad Bumworth and Buster Roberts.  The event raised $700 for the VFW Post 3584.