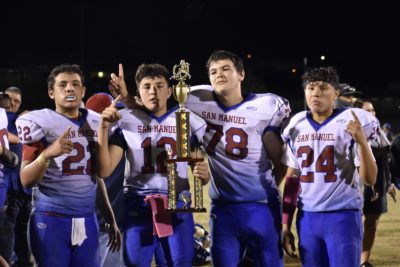 “We stuck together as we made mistakes throughout the game,” San Manuel head coach Freddy Burnham said. “That allowed us to overcome them.”

The Jr. Miners avenged a loss to the Jr. Lobos just a few weeks ago – a 34 – 6 defeat – to reach a goal they set before the season.

The Jr. Miners’ defense was the difference in the second meeting between the teams, as the unit allowed only one touchdown. Hayden’ other two scores came only special teams.

“Our defense came up with some big stops that allowed us to get the ball back,” Burnham said.

Isaiah Ramirez rushed for a pair of touchdowns for the Jr. Miners while Mathias Medina ran for another.

“We played well,” Lorona said. “(San Manuel) is very big, tough team. We’re undersized compared to them, but we fought hard until the end. We just ran out of time because they controlled the ball and clock and kept the ball away from us.”

Congratulations to the players and coaches on both teams.