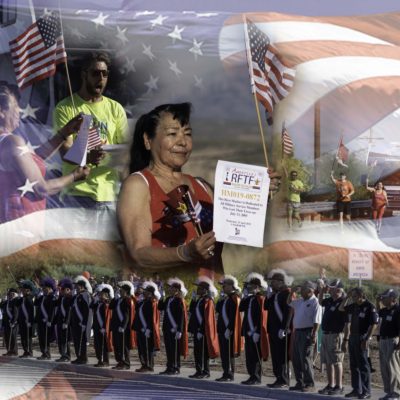 An amazing collage of images from the Run for the Fallen stop in Mammoth, AZ. Photo by Vince Apuron, Apuron Photography

In 2004, a young soldier from Eastern Pinal County lost his life in Iraq. This was the first casualty of the Iraqi War for the small communities of Winkelman, Dudleyville and Mammoth. His family and the community mourned his loss.

Throughout the month of April that young soldier and other killed in the war against terror will be honored as part of America’s Run for the Fallen, a 6,000 mile trek from Ft. Irwin, CA to Arlington National Cemetery in Washington, DC. The route through Arizona, which started late last month in Parker, took a turn through the Copper Corridor last week.

At each mile of the route, the run team will stop and honor one of the men and women who died in military service to America and the War on Terror. 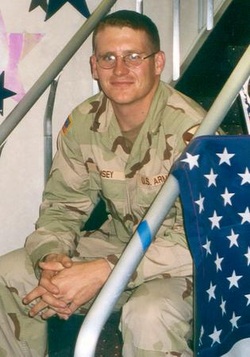 Carson Ramsay was 22 when a car bomb was detonated outside a market in Baghdad on Oct. 10, 2004. Carson was a gunner and was riding on top of a Humvee in a convoy that was passing the marketplace. He was the only American casualty, but 10 others, all Iraqi nationals, were also killed.

Carson was born Jan. 4, 1982 and was raised just three miles north of Mammoth. He attended school in Kearny and was a member of the Ray High School MCJROTC. He enlisted in the Army in May 2001 before he graduated. He was a member of the 1st Cavalry Division stationed at Ft. Hood, Texas.

He was an avid outdoorsman. He hunted and fished and was planning on purchasing a Harley-Davidson motorcycle when his tour of duty ended in March 2005. In an interview with Copper Area News in 2004, his parents said that Carson’s last message, left on their answering machine the Friday before he was killed, reminded his father, Cecil, to check on the motorcycle a man in Kearny was holding for him in Kearny.

“He had said, ‘Hi, I’m fine. Tell dad to check on the Harley again for me,’” his mother Elaine said.

“I still hadn’t done it on Sunday,” Cecil said.

Carson was injured earlier the same year in another IED bombing and had shrapnel embedded in his cheek. He was only out of the action for three days before he was back on the front lines.

Carson visited his family in June 2004 after his grandmother passed away.

“He was very upbeat,” Cecil told Copper Area News. “One thing I’ve told everybody, when he got ready to go back I asked him, are you scared?”

“Whether he was real patriotic, he never told me,” Cecil said. “He just told me, ‘That’s my job; I’ve got to go back and do it.’ That impressed me.”

Carson’s a hero to all of us.

Carson’s story and many others can be found online at www.runforthefallen.org. Visit the site and read the stories of many other (too many really) Arizona Heroes. 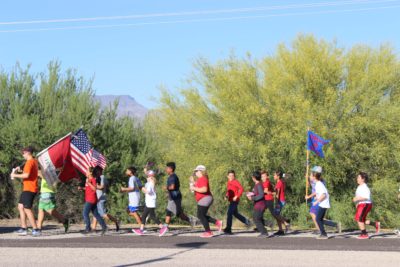 Like a pied piper, volunteer runners with the Run for the Fallen lead local school children through the town. Photo by Lauren Carnes