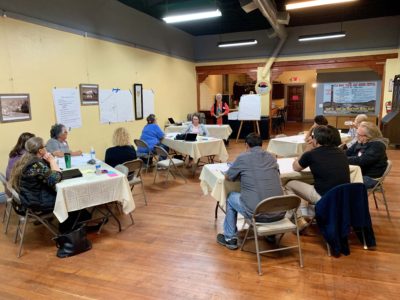 The Rebuild Superior, Inc. Board of Directors held an internal workshop Saturday, March 30. Topics included a look at Rebuild’s roots, current work, as well as initiating a review of Rebuild Superior’s vision and mission. Later in the year, Rebuild Superior will hold a public meeting to report on its work and review future options with Superior residents. Rebuild Superior was awarded funding by Resolution Copper, and is in the process of implementing a housing repair grant funded by the US Department of Agriculture. Rebuild Superior is coordinating with local residents on the Pinal Avenue Project which began with a clean-up, will have a house painting component, and then help with home improvement.  Rebuild Superior is fundraising until April 12 through the “A Community Thrives” program to raise at least $3,000 using the online Crowdrise website (https://www.crowdrise.com/o/en/campaign/rebuild-superior-inc-arizona) which will put Rebuild Superior in competition for support grants.