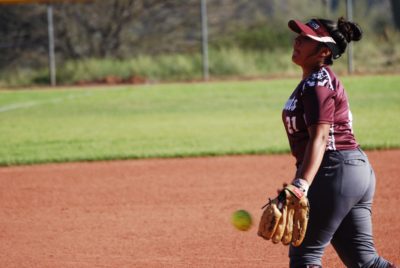 Daniella Hinojos pitched her eighth win of the season.

The Ray softball team has won its last four non-tournament games, including all three games last week in lopsided fashion, and as a result has taken over the top spot in the 1A state rankings.

In the win against Duncan last Friday, senior Amy Kenyon went 2-for-3, including a double and a homerun, and drove in four runs. Sophomore Chelsea Boyd-Flores also went 2-for-3 with four RBI’s, slugging a triple for one of her two hits. Julie Meza, a senior, hit two doubles – two of the nine extra-base hits by Ray in the game – and drove in two runs. Senior Daniella Hinojos was 3-for-4 with three RBI’s. Tara Lorona also had three hits to go along with an RBI.

Hinojos was again stellar on the mound, throwing a complete-game shutout for her eighth win of the season and eighth complete game. The senior ace allowed a lone hit without issuing a walk and whiffed six in five innings pitched.

Up next:  Apr. 5 at Arizona Lutheran Academy and Apr. 9 vs. Hayden. both games are scheduled for 4 p.m. 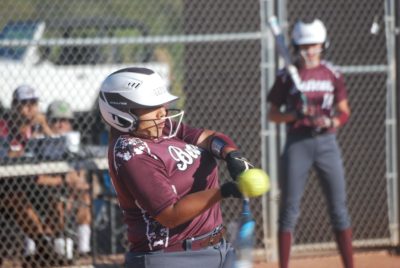 Danielle Barajas at bat against Duncan. 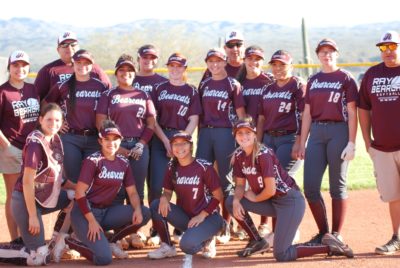 The Ray girls softball team and coaches were happy about their big win over Duncan last week.