Glaess, a senior, was among student athletes nominated from 186 high schools who were selected based on the combined criteria of 40 percent Academics, 40 percent Football Accomplishments, and 20 percent School & Community Citizenship and participation. 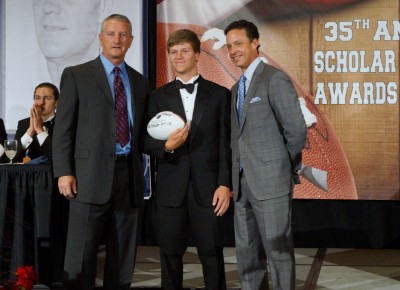 “It’s great for our school and football program to seemingly have a player or two (who) receive that honor every year,” Queen Creek football head coach Travis Schureman told the Ledger. “It’s just as important to be successful in the classroom as it is on the football field and the kids in our program are all solid people who try to do it all the right way.”

Glaess, with a 4.315 GPA, was named to the 2015-16 Fiesta Bowl Charities First Team. He earned several All-State and All-Section recognition at three different positions – punter, kicker, and defensive back – after last season. He was also named to the Sports360AZ.com All-Academic Team.

Despite all of the postseason accolades, Glaess was surprised by his most recent recognition.

“It’s such an honor because I didn’t know I was going to receive it,” he said. “Coach Swartz had talked to me about it and I didn’t expect to make it, especially first team, and then I (did). I was happy when I found out.”

Glaess signed his national letter of intent in February to play football at Missouri University of Science & Technology, located in Rolla, Missouri.

Visit www.aznff.com for a complete list of the 2016 AZ NFF Scholar Athlete Class.