Queen Creek multi-sport athlete Taryn Simmons signed to play golf at Chandler-Gilbert Community College earlier this year, choosing the local area school because it offered and was close to home.

Simmons helped lead the Lady Bulldogs’ girls’ golf team to a 14th-place finish at the Division II State Championships in November and placed 29th individually, the highest on the team.

In addition to being an excellent golfer, Simmons is a superb centerfielder and leadoff hitter on the Lady Bulldogs’ softball team and chose an offer to play golf rather than other offers to play softball.

“I chose golf over softball because it will be a sport I can play for a lifetime as opposed to softball, which will most likely end when college does,” Simmons told the Ledger in an email.

Simmons, who will study Sports Medicine & Physical Therapy, has plans to continue her education at Northern Arizona University once she’s finished at CGCC. She admits her desire to attend NAU influenced her decision to play golf in college.

“NAU not only has a great sports med program, but they also have a golf team and not a softball team,” she said. “I love softball, and always dreamed of playing at ASU, but it seems more practical to think of my education and future at this point.” 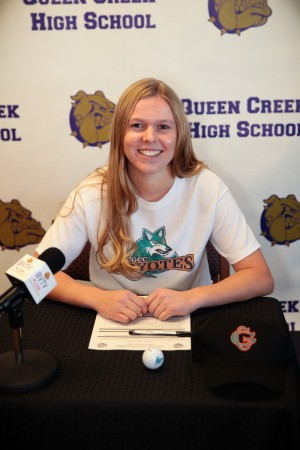 Simmons called her experience at Queen Creek “amazing” and said her love and fun of each sport has increased as a result. She credited the Queen Creek golf and softball coaching staffs for helping her better learn the sports in addition to being more verbal and outgoing, which certainly was not any easy task, considering her hearing impairment.

While most of us can hear the roar of the crowd after a homerun or an outstanding defensive play, Simmons only hears the silence of a crowd; like that before a tournament-winning putt on the 18th green.

Simmons, who diagnosed with having a moderate to severe hearing loss at 16 months, went from wearing two hearing aids to one aid in her left ear after a progressive loss at age five left her deaf in the right ear. She later was diagnosed with a profound to severe loss in both ears.

After attending a specialized school for students with hearing loss at age three for four years, Simmons entered first grade as a regular student. She admits coping with the hearing loss hasn’t always been easy and she’s encountered some people who “aren’t always nice.”

“My parents always tell me I can do anything I want and (they) push me,” she said. “I know college will be hard, but with the help of my family I think I will do great.”

We don’t have any doubts.