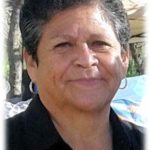 Christine was born in Patagonia, Arizona on July 23, 1949 to parents Raul and Catalina Sanchez. She had 9 siblings, sisters, Mercy, Cuca, Connie, Lucy and Helen and brothers, Frank, Alfred, Raymond, and Frank.

Christine married Robert Alvarez. She gained 2 step children, Mike and Richard, and together she and Robert had 3 boys, Henry, Robert and Albert. She also had 14 grandchildren and 15 great grandchildren.

Christine was a homemaker and food service worker. She was known for her big heart, watching westerns and love for the Arizona Diamondbacks. She was taken way too soon and will forever be remembered for her infectious smile and love for her grand kids.

Christine is preceded in death by her parents Raul and Catalina Sanchez, sisters Mercy Ramos and Cuca Denogean.

She is survived by her sons, Henry (Katrina), Robert (Dolores), and Albert Mendoza; and stepsons, Mike and Richard Alvarez. She also leaves behind her siblings, Frank (Rosemary), Alfred (Susan), Raymond and Mike Sanchez, Connie Bogenschutz, Lucy Fritz and Helen Peru.

Memorial Mass will be celebrated Saturday, April 13, 2019 at Saint Francis of Assisi Catholic Church at 10 a.m. followed by interment at Fairview Cemetery.