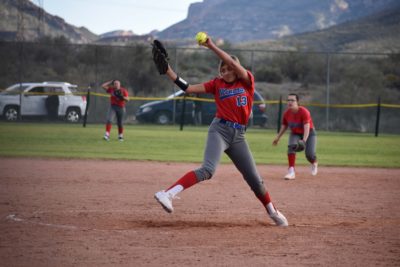 The ace of the San Manuel staff improved to 3 – 1 and maintained her 0.00 ERA after surrendering only two hits with a walk and 10 strikeouts, the second time in as many games that she whiffed 10 batters.

San Manuel scored three runs in the first, second and fifth innings with a single run in the fourth.

San Manuel senior Taya Dockum went 3-for-4 at the plate, including two doubles, with three RBI’s while Waddell added two hits – one a homerun – with four RBI’s. Junior Samantha Waddell was 2-for-3, including a double, and Aubrey Encinas also doubled. In total, the Lady Miners knocked five extra-base hits.

The Pantherettes, who suffered only their second defeat of the season (both against 2A teams), were limited to hits by senior Lindsay Ketron and freshman Danika Bryant.