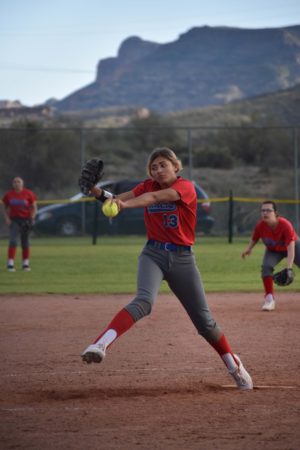 In last Wednesday’s 10 – 0 win against visiting San Miguel, freshman Jazmyne Waddell homered in addition to pitching her third-straight complete-game shutout, improving her record to 5 – 1. She allowed one hit and whiffed 12 Vipers’ batters with a pair of walks.

At St. Augustine last Thursday, Savanna Roan had two hits and drove in six runs to help lead the Lady Miners to a lopsided 22 – 0 victory, during which they scored all their runs in the first four innings. Jazmyne Waddell had four hits, including a double and drove in three runs while Andrea Guerrero went 2-for-5 with a pair of RBI’s. Aubrey Encinas doubled and drove in three runs.

All that offense was more than enough for senior pitcher Taya Dockum, who was making her first start of the year. She allowed just two hits and fanned seven Wolves’ batters in the complete-game shutout.