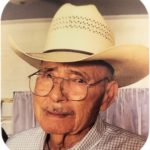 Joe Lopez Castro was born Dec. 26, 1929 to parents Basilio Castro and Gerarda Lopez. He was born at home in Superior, Arizona and his grandmother Filijia Lopez was the midwife.  He was one of two children (4 brothers and 7 sisters) and was the last living of his family.

Tata Joe was a lifelong resident of Superior until he passed on March 17, 2019.

On June 5, 1946 he enlisted at the age of 16 in the US Navy and received the World War II Victory Medal. He was honorably discharged on March 31, 1948. He returned to Superior and started to work at Magma Copper Company until the mine closed.  He then worked for the Town of Superior for a few years.

At the age of 56, he returned to school. He received his General Education Diploma on Oct. 7, 1985. He went to work at the Arizona State Prison as a Correctional Officer.

When he decided to retire for good, he wanted to take care of his wife Mary and make sure that all her needs were taken care of. He did this with all his attention and dedication and all his love.

Tata Joe would also visit his friends to check on them and always offered to help them.

He taught a few friends American History so they could obtain citizenship papers. He took this very seriously.

Joe’s love for his family and friends will never be forgotten. We love you, Tata Joe. Rest In Peace.

Services for Joe were held Wednesday, March 27, 2019 at St. Francis of Assisi Catholic Church in Superior, Arizona. He was laid to rest at Fairview Cemetery.

The family was assisted with exceptional service from Superior Funeral Home.