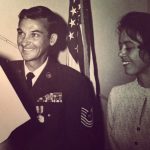 Gale Henritz Pennington, 83, passed away from this world, of natural causes, on April 27, 2017 in Bluefield, WV.

Gale was preceded in death by his wife Margery; siblings,  Carl, Ed, Walt, Garnet, and Elaine: and his grandson, Thadius. He is survived by his sons, Derek and Brian; grandchildren, Jocelyn, Bailee, Kevin and Jarakah; great-grandchildren, Joy, Jaxx, Holden, and Paislee Ray; brothers, James, Jess, John and Warren; and sister, Shirley.

Gale was born in Bluefield WV, in 1934 and spent much of his life serving his country in the Air Force. It was in England that he met Margery. After returning to the States, they spent some time in Aurora, Colorado where Derek was born, then back to England for a time, where Brian was born. Gale finished his time in the Air Force at Davis–Monthan Air Force Base in Tucson. Then, he  went to work for Fry’s in Tucson, while living in Oracle. He retired from Fry’s 20 years later. A few years ago, he moved back to West Virginia with his son Brian, to be closer to his remaining siblings.

Gale had an acute sense of humor, many times he was the only one laughing, which was just fine with him. He had an infectious laugh though, so he never laughed alone for long. He enjoyed being with his family, and fishing at the White Oak Lake, the ‘family’ pond, as well as driving around the countryside seeing the sights.He is loved and missed dearly.

He will be buried on June 3, noon, at Oracle Cemetery, on Oracle Avenue in Oracle.