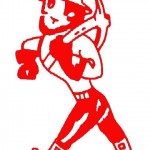 After allowing Miami to score two runs in the bottom of the seventh to tie the game, the eighth-ranked San Manuel softball team scored three runs in its half of the eighth inning to earn its eighth win of the season in Miami last Friday, 8 – 5.

Junior Gabriella Estrada was one of the four Lady Miners with two hits in the win in addition to her game-high three RBI’s. Savanna Roan, Samantha Waddell and Jazmyne Waddell, who had a pair of doubles, were the others.

Jazmyne Waddell earned her sixth win of the season despite allowing a season-most eight runs, three of them earned. Still, the freshman phenom was dynamic, whiffing 13 Lady Vandals batters in the game, which was her sixth-straight with 10 K’s or more.