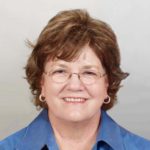 Andrea Leigh Webb Griffith, whose goodness and music nurtured the lives of all those who were around her, passed away on March 1, 2019.

She was born to Doris Herlihy Webb and Merle Winslow Webb on Jan. 4, 1947 in Tucson, Arizona. She grew up in Tucson, where she graduated from Catalina High School. She and her younger sister Virginia Ann were as close as two sisters could be.

While attending the University of Arizona, she met Bruce Byron Griffith, a tall, masculine redhead, at The Church of Jesus Christ of Latter-day Saints Institute. Bruce pursued her with great tenacity. They were married for time and all eternity in the Mesa, Arizona Temple on April 12, 1968.

Over the years, she raised eight children, who were her greatest treasures: Corina, Gary, David, Cynthia, Julia, Keri, Amelia and John. She was the most patient, wonderful mother in the world and those qualities also made her the best grandmother to her 22 grandchildren and one great-grandchild.

With a music teacher for a father, Andrea was destined to be musical. She played the flute and piano and later learned the organ, which she played for church services at an upbeat tempo the congregation appreciated. She was a master accompanist — she always made the singers sound better than they were and every note she played was felt. In college, she was in the University of Arizona’s marching band and played in the first Super Bowl halftime.

Her love for her Savior, Jesus Christ, and her family were the two most important things in her life and she often expressed that love through music.