The top-seed Superior baseball team overcame six errors and took advantage of 13 others made by No. 3 Valley Union to win the 2017 1A Baseball State Championship on Saturday night at Surprise Stadium, 12 – 8.

“In this game that’s a lie,” answered Superior head coach Manuel Ortega after the game. “Fortunately, we did settle down and we had to make some plays so that helped.”

“By far the worst game of the year for us on defense,” he continued. “But the boys just fought and fought, and that’s what they should’ve done.”

Valley Union held a 3 – 0 lead heading into to the bottom of the second inning before Superior started a two-out rally, scoring three runs in the inning, which was highlighted by a two-RBI single by sophomore Jesus Castellanos.

The Panthers’ defense failed left-handed starting pitcher Steven Ybarra in the third, when it committed three errors, allowing the Blue Devils to reclaim the lead with a five-run inning.

Trailing 8 – 3 entering the bottom of the fourth, Superior head coach Manuel Ortega said he reminded his team, “There’s a lot of game left. Don’t get down, relax, have fun, and play Panther baseball.”

The Panthers responded with disciplined plate appearances, putting the ball in play and forcing the Blue Devils’ defense to make plays that it didn’t. Valley Union committed six errors in the inning, which contributed to the Panthers’ scoring six runs to capture a 9 – 8 lead. 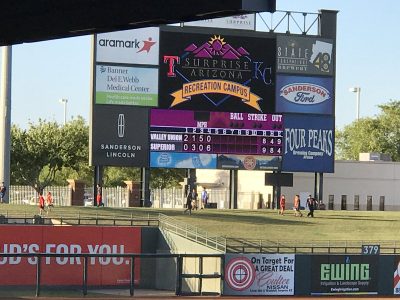 Superior took a 9 – 8 lead with a six-run fourth inning and never looked back.

Junior Marcos Bueno hit a lead-off triple and scored on an RBI-single by Ybarra. Senior Austin Navarrette hit a double – one of four hits in the inning for the Panthers – that scored another run. The Panthers sent 12 players to plate sans a strikeout.

“We don’t make the defense work if we strikeout,” Ortega said. “We want to put the ball in play because then they have to make the play to get us out. We’ve had that approach all year.”

“That gave us a chance,” added senior Stevie Denogean. “We had to force them to make plays. If they can make them, hats off to them, but if they don’t then let’s keep going.”

Denogean, who reached base three times in four at-bats, also starred on the mound in relief, giving his team the opportunity to erase the five-run deficit. The right-hander pitched four scoreless innings in relief, including the final inning, where he recorded the last out of the game on a called third strike.

The final out, Superior’s @StevieDenogean1 gets 3rd K of inning and Panthers win 1A state title. pic.twitter.com/5HDiTuIf77

“My job was to just go out there, throw strikes and have my defense help me,” Denogean said. “If I could mow them down, then I mow them down.”

Ortega was more than satisfied with Denogean’s performance as well as that of his sophomore starter.

“He came in and threw great,” Ortega said about his reliever. “He hit his spots very well and he did his job.”

“Steven Ybarra did his job (too), we just had five errors,” he continued. “He threw very well but had 70-plus pitches through three innings. The poor kid worked hard.”

Superior added a pair of insurance runs in the fifth, one on an error and the other on an RBI-single by first baseman Kale Major. It added another run in the sixth on a passed ball to account for the 12 – 8 final score.

It was no secret entering the championship game that it represented the last chance for the seniors on the team to win a state title before graduating later this month. One of the most talented and decorated classes in Superior’s history, along with their teammates, answered with the pressure on. 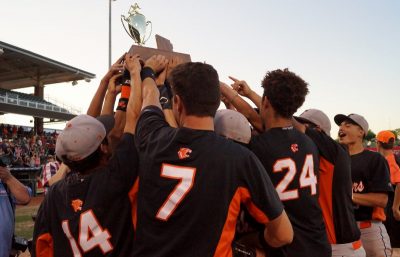 “This is what every high school kid chases,” said senior Nicolaus Cruz, arguably one of the best and most decorated athletes to ever walk the campus at Superior High School. “We’ve chased it hard for four years and fell short twice in football. We knew we couldn’t go out (without a championship) because this class has tons of talent. We finally hit our potential and we’re bringing the state title back to Superior.”

“To see them happy and finally get (a state championship) is why I’m coaching,” Ortega said. “To not have to see any tears after a playoff loss was the best feeling I’ve had.”

Even in victory there were tears, albeit a different sort.

On Saturday night, there were tears of joy.